The Hellraiser franchise… a love and hate relationship I have with this franchise. Granted, I haven’t seen ALL of what Hellraiser has to offer but I have enough insight to where it has so much potential (still) to become greater or take that next leap into attracting new fans. But this post is not about the history of Hellraiser but a review on the 3rd installment: Hell on Earth and boy, this movie… insert side eye emoji. 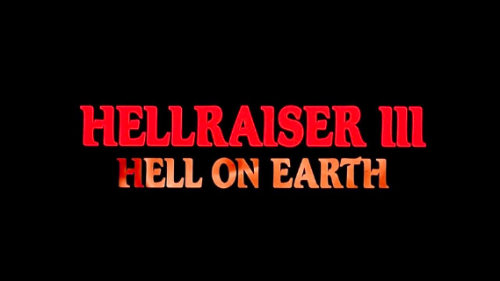 First off, I watched this on vhs. I have a copy that is somehow a promotional copy so there’s a runtime and occasionally the copy of “1993 Paramount Pictures” logo in the bottom left. By the way, this wasn’t distracting in any way. I don’t know if this is a final cut or director’s cut or even the theatrical cut, it’s unspecified. As a fan of the first two Hellraiser films, I remember briefly seeing bits and pieces of Hell on Earth but I didn’t remember a whole lot. Now, seen in its entirety, I have a lot of things to say about this movie.

Let’s start with the positives! 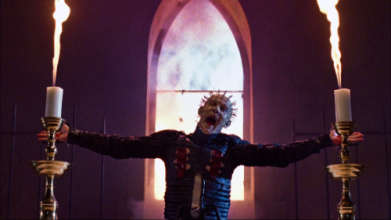 Doug Bradley is the reason why this movie and the latter films aren’t hated. Bradley’s performance as both Elliot and Pinhead are great, believable, less stifling and more at ease. I liked seeing the human aspect to Pinhead, that vulnerability, that urge to fix things and do good versus Pinhead who really just doesn’t give a shit and mocks and torments. Another nice addition was seeing Kirsty (Ashley Laurence) in “flashbacks” and I wish we had gotten a little bit more of her. I know we had just seen her in Hellbound and the Channard Institute but I like the character of Kirsty, I always want more.

Another fun aspect were the new cenobites created. Some were better than others (Barbie & CD Head) but I think visually, they looked interesting. The use of modern technology included wasn’t too bad either. They did look a bit too dry as… they didn’t look “wet” or moist enough. If you look at the previous cenobites, they look wet, look gooey and sticky. These ones don’t look it, they look like they come from a desert area.

And the church scene with Joey (Farrell), Pinhead and the Priest is quite iconic and clearly mocking religion, and I wasn’t bothered by that only because this was the ONE scene I clearly remember and I know this movie had controversy set around that scene alone.

Now let’s get to what I did not like. And what I did not like was the script and the final execution on screen. Watching the movie, I kept thinking, why are we doing this? Why is this happening? Why are we introduced to characters I do not care for or dragging them out longer than necessary in this. At least 20-30 minutes of this movie could have been cut. And then looking up the background work of this movie gave me a lot of insight and answers. Development hell, things with the Weinstein brothers involvement (eye roll), the cuts and script changes, it’s obvious in this movie. A big thing we could have cut is JP’s role. I understand he becomes a cenobite later but his role in the film was pretty much trash. We didn’t really need a character like that to introduce us to the Pillar. Maybe that’s me but there could have been MANY ways to bring us into the world of Hellraiser without JP.

Another thing is cutting down the huge gore fest in the club scene when Pinhead arrives. It went on for too long showcasing what Pinhead can and cannot do which we’ve seen in the previous films so why repeat it? It was unnecessary. We could have gotten the moment where he walks into the club, that heightened fear and then maybe one or two infliction of pain and then we cut to where the blood starts pooling underneath the door/floor. And when Joey comes to the club to find Doc, we are then struck with the bodies and the aftermath. To me, that would be more impactful than seeing all the bull.

The acting wasn’t so great either. Like I had mentioned before Bradley kind of saves this movie but Farrell’s performance wasn’t really selling Joey to me until the last half hour of the movie; from the club to the end of the movie. The Joey I had envisioned doesn’t show up til the end and that’s kind of sad, in my opinion. I can’t compare her to Tiffany or Kirsty but there is a disconnect.

And finally, we don’t need all those explosions. This is not a Michael Bay movie. This movie is an example of what happens when the studio gets too involved.

Hellraiser 3: Hell on Earth stars Terry Farrell, Paula Marshall, Kevin Bernhardt, Peter Boynton, Doug Bradley with Ashley Laurence and directed by Anthony Hickox. I give Hellraiser 3 a 3 out of 5 stars. It’s alright, nothing too spectacular but I saw its potential. Sadly there were too many cooks in the kitchen.