How have I not talked about this topic as a whole? Television and horror go great together. Now, horror can be straight up horror and gore, supernatural or paranormal elements, or include fantasy, sci-fi, mystery and thriller. I avoided doing television for a long time because depending on the show, the seasons can be either long or it can be less than 3 seasons to showcase on the blog but please know, I am a BIG fan of tv horror. Now these listed as my favorites or even in the honorable mention category have a mixture of all sorts of sub genres under the horror umbrella. Some are straight horror, others have an extra layer and that’s how I define the genre.

Now let’s get into my list! And oh, spoilers ahead! 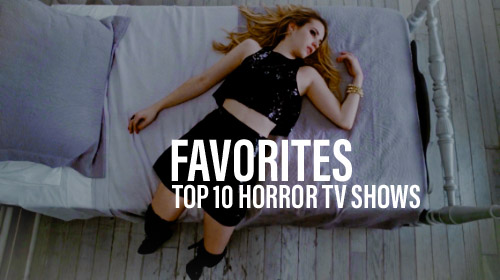 10. Masters of Horror (2005-2007) : Originally on Showtime and created by horror master Mick Garris (over dinners with fellow horror greats), this series showcased their talents in weekly episodes. Only lasting 2 seasons, you can see and tell their signatures when it comes to filmmaking or writing or producing. Some favorite episodes include Jenifer (Dario Argento), Pelts (Argento), Chocolate (Garris), Deer Woman (John Landis), Cigarette Burns (John Carpenter), Fair Haired Child (William Malone), and Imprint (Takashi Miike), just to name a handful. Each episode is different and unique, and if you have not seen the show, please do so.

9. Channel Zero (2016-2018) : Syfy has had some interesting shows come onto their network. Some good like Z Nation, Battlestar Galactica (I miss that show), or Face-Off, one of the few reality competition shows on the network and then there is Channel Zero. This show, I wonder how it ended up on Syfy to be honest. This show now has a place on Shudder (appropriate) and each season is based around very popular creepypastas. The first season is Candle Cove, a television series targeted at children which had very disturbing and ominous undertones that follow into adulthood. Second season is The No-End House, third season is Butcher’s Block and the final season is The Dream Door. I still need to finish the last two seasons.

8. The Walking Dead (2010-present) : I was there when the show first premiered in October, watching this new world of post apocalypse life with zombies aka walkers in this universe. The special effects are amazing and practical or CGI (if necessary), the acting has been on par and the show has created new icons in television horror. Rick Grimes is probably one of the more complex characters to come from the show, we are following him and his life after waking up in a hospital in said new world. His relationship with his son, wife, friend/co-worker and meeting new people, I was all about this show up until the dreaded Negan appeared. And then they killed off characters for shock value. I’m not here for any of that. I don’t watch the show anymore sadly, there are new characters and actors on the show now that I don’t know and don’t care for. The Negan Era is not my jam and I know I’m not the only one. 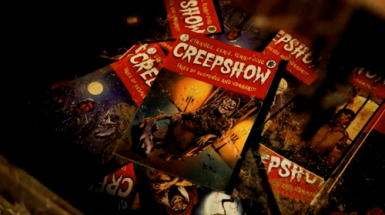 7. Creepshow (2019-present) : A brand new series available on Shudder and at the helm is Greg Nicotero, a horror legend in his own right. If you aren’t aware, Creepshow is based off the titled film done by George A Romero and involved both Stephen King and Tom Savini, a love letter to the EC Comics of the past and there is a sequel Creepshow 2 but the format of the show is similar. The Creep presents many different stories, in comic art format and then turns into live action. The gore and special effects, once again, are great because Nicotero is a big part of the design and effects and execution. There is an animated special available but I cannot wait to see what Creepshow does next.

6. Supernatural (2005-2019/2020) : I watched this from the beginning. 2 brothers, Dean and Sam Winchester, reunited to look for their missing dad. This show went from drama and horror/supernatural elements to then including meta, religion, and building an audience that is to me the poster child of The CW. I loved seeing the introduction of Ruby, the moment when we all realized that Castiel was an angel and that angels were now a part of the canon. God aka Chuck becoming “humanized”, the ups and downs of the Winchesters by going to hell, dying, resurrection, losing family and friends, befriending the enemy and turning their backs on the so called “good guys”. But at the core of it all, the show is about the brothers (and now Castiel) and their relationships, their character growth (or setbacks). I did stop watching around season 10 or 11. I think I outgrew it but I keep tabs on what’s happening with the show.

5. Are You Afraid of the Dark (1990-1996, 1999-2000) : UGH my childhood. Now, I could have added Goosebumps into the list, however I do prefer the books more than the episodes. Some of the episodes were translated better than others. AYAOTD has more better episodes than Goosebumps in my opinion. Nickelodeon in the 90s was my jam. I watched the nicktoons, Snick and Nick @ Nite sometimes. AYAOTD was a part of the Snick lineup (along with Clarissa, Alex Mack, All That, Kenan and Kel, etc) but this was a top favorite show. A group of kids (The Midnight Society) would go to a hidden location to meet up and tell stories around the campfire. That was how the layout of the show worked, each kid got their moment to shine on sharing a story. Some of my favorites were from Betty Ann.

4. Stranger Things (2016-present) : The little show that built Netflix into what it is, in my humble opinion. I also have a soft spot for the show since it is set in Indiana, fictional town of Hawkins but I enjoy any show or episodes that take place in Indiana. Ironically, it’s either drama based or horror/fantasy such as Stranger Things. Set in the 80s, a decade where I don’t know much about since I was born in the latter half of the decade, 1987, but aware of the cultural impact of the 80s. I will say the turning point into S1 that I really got on board is when Hopper is looking over the “body” of Will and he cuts into the body and pulls out the stuffing… I legit screamed and I knew the show got me hooked for the rest of the time. The acting is great, love the gore and special effects but it’s really about the characters, immersing you into this world of a small town in the 80s and does it very, very well.

3. American Horror Story (2011-present) : If I had to pick between AHS or Glee, I’d pick AHS every single time. Each season is unique, somehow everything is connected but the one season(s) I haven’t seen or in its entirety is Hotel, Cult and Apocalypse. My personal favorites are Murder House, Asylum, Coven and 1984. The latter I thoroughly enjoyed last year. 80s nostalgia is still a big thing, the fashion, very Friday the 13th meets Sleepaway Camp meets The Burning and the cast is quite fun. The cast is full of recurring actors such as Emma Roberts, Jessica Lange, Sarah Paulson, Evan Peters, Lily Rabe, Kathy Bates and Frances Conroy but please take note of Angela Bassett, Denis O’Hara, Adina Porter and more who have also occurred more but less. Season 10 has been greenlit but Peters, Billie Lourd, Bates, Porter, Rabe, Leslie Grossman, Angelica Ross, Finn Wittrock and Macaulay Culkin will be involved. I cannot wait!

2. The Twilight Zone (1959-1964, original run) : This series is the grand poobah of the genre. This is why Are You Afraid of the Dark exists. Rod Serling was an amazing creative, his hand was all throughout this show. This show had people of color in leading roles, stories filled moral endings and twists. The show is credited with introducing fantasy and scifi to its audience, which if you know your film history, the sci-fi genre and subgenre really grew in the 1950s. I will be diving into further details of my favorite episodes of the series by season. I’ve already done S1 which you can read here and stay tuned for future posts.

1. Hannibal (2013-2015) : This show has everything that I love all captured into 3 seasons. Another show where I wonder how it got greenlit to NBC of all places and yet it worked on that network. The brainchild of Bryan Fuller (Dead Like Me, Pushing Daisies) and based off the works by Thomas Harris, Hannibal is about the titled character (played by Mads Mikkelsen) before the events of The Silence of the Lambs and his eventual incarceration. The show is also focused around Will Graham (Hugh Dancy), a bigger role than in Mindhunter and a “stand in” for Clarice Starling and the ever bi-polar relationship of Will and Hannibal. The writing is great, the visuals are beautiful, artistic, the gore itself is even beautiful. Huge shoutout to the costume/wardrobe department for basically giving these characters a visual life as well. Hannibal’s suits, Alana’s transformation into the final season wearing pantsuits and her hair pinned up and even Will into the second half of season two looking more polished but still quintessential Will from season one. I personally would love another season or movie or something…

These are my top 10 favorite horror tv shows. Of all time? I don’t know about all that but right now, these are a good handful that I would recommend to anyone who wants to see horror translated to television. What are some of your favorites? Did I list them or are they new? Comment down below and share!