A “bankruptcy of imagination” is how film critic Roger Ebert described this film. And yes, Ebert definitely had a love/hate relationship when it came to criticizing horror films. Some films he loved/liked/enjoyed such as Jaws, The Blair Witch Project, Paranormal Activity, Let Me In, The Cabin in the Woods, Drag Me to Hell, The Shining and much more but the other end of the coin is not enjoying some horror cult films/classics to some like Wolf Creek, Saw (like really??), Cabin Fever, The Craft (it got 2 stars, oh that hurts), John Carpenter’s The Thing and of course this film, Hellraiser.

Is it a perfect movie? No. There are some moments in the film where I’m very confused or wondering why they did what they did and it’s too late, can’t change it but it is what it is. I would have rated it a little higher than the sad 1/1 and a half star review that Ebert gave it (ouch, but I can see why he gave it that) but this is not about him. This is about the filmmaking behind Hellraiser. 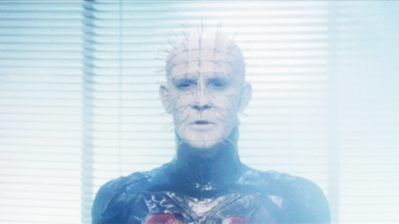 I have the 20th Anniversary dvd of Hellraiser and I enjoy watching and listening to commentary (if there is commentary), which there is with Barker, Laurence and the composer of the film Christopher Young. What I liked is hearing from Barker’s point of view, his influences (a lot of which are Dario Argento which you can see in the film), how and why he did what he did as in special effects, explaining nuggets here and there that we as the audience would miss out on and if you haven’t heard or “watched” it, I’d recommend you do so.

The biggest takeaway for me when Hellraiser is playing is that the decision to basically bathe the Cenobites in light is… beautiful. That’s the only way I can describe it. When it comes to monsters, we tend to hide them in the darkness (A Nightmare on Elm Street, Friday the 13th, John Carpenter’s The Fog) but we it’s not common to basically have them in the forefront, looking disgusting and covered in blood and brightly lit where we can see everything they have to offer.

Besides that, there are some great up close shots and focal points that I enjoy as well. The story itself I enjoyed too, this family drama being circled around darkness and Cenobites and you ask yourself who is really the villain in this? In Hellraiser, you’d think it’s the Cenobites because we are conditioned to think that anything or anyone “supernatural” is the baddie and yes, they are the villains but like the “B” villains. The “A” villains are human monsters in the form of Frank and Julia Cotton.

The visuals are great.

The gore is great.

The special effects aren’t bad either. I love the look of the Cenobites, all are distinct and unique into themselves. The transformation of Frank is great is well.

Like I said in the beginning of this post, I wonder what Ebert saw (or didn’t) when he was reviewing this film. I see some faults with it because it’s not perfect at all and I have accepted that. I think there are better handfuls that make the movie fun and work than negative parts about it… like what the hell is that ending with that flying demon… thing at the end? Like. WHAT. And why are seeing it from its point of view?

And the boyfriend was kind of useless too.

And that’s all I’m going to say.