Marvel and Disney+, you actually did it!

You gave us horror and didn’t cutesy it. I’m really impressed by what I watched last night and after seeing/reading reviews of people enjoying this, this was a great watch for spooky season. I am talking about Werewolf by Night that is currently available on Disney+ and honestly, I hope they do more specials like this.

I’ve already done a mini review on Letterboxd but I wanted to give a more thorough yet short review here.

Let’s talk about Werewolf by Night!

First of all, I was immediately hooked when the typical Marvel Studios title card played but it was spookified with the screams, the epic choir music, giving us this homage to classic horror from the 1930s to the mid to late 1950s.

And I think that’s what Werewolf by Night was; an homage or even a bit of a spoof of these films that we have seen many times. 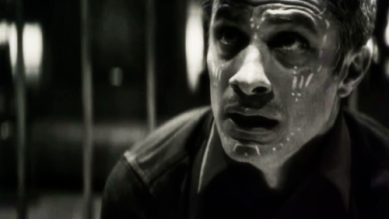 I enjoyed the atmosphere, the music was a great addition to enhance the setting of underworld/underground reality with monsters and monster hunters being in the same room, with one goal of collecting the monster, getting the Bloodstone but it became much more than that. I liked the characters, especially our big 3 of Jack Russell, Elsa Bloodstone and Man-Thing. They felt fully fleshed out within the 50 odd minutes of this short and I am ready to see more of them.

Russell (played by Gael Garcia Benal) was likeable, sympathetic, and tragic. Deep down, he’s just a man who is very unlucky with full moons. And he isn’t a fighter or this “monster” of just attacking, he was forced into a position where he had no choice BUT to fight. Elsa (Laura Donnelly who also looked like Krysten Ritter) had “main character” written all over her. I liked her performance of a character who essentially was just over the monster hunting bullshit and in turn, she has 2 monster allies. And Ted Sallis, our Man-thing, I just loved everytime he was on screen and the design is great in black/white and in color.

Also a big shout out to Harriet Sansome Harris who played Verusa as well. She was a great, over the top, big antagonist.

Other things I enjoyed: the look of the werewolf! It’s more man than wolf and very much in the vein of The Wolf-Man or Teen Wolf and I really liked the silhouette transformation scene and how that was shot. Another thing are the camera angles, long shots, widening shots like when we see Russell transformed as the wolf or the long hallway fight scene where the camera doesn’t cut and we’re watching all these bodies get ripped apart and blood splatter on the lens and then the addition of the light flashing and it was very cool. Also fun note, there’s a moment where we see like “cigarette burns” in a corner and if you don’t know, that’s a signal to the operator to add the next role of film.

The only gripe I do have is I wished that a) we spent more time in that cool garden maze, it was very Hellbound: Hellraiser II or The Shining and b) I wish we could have known more about the other hunters. Minus the Scottish one, we don’t know anything else about them but also, they were just “bodies”.

I did give this a 4.5 out of 5 and I am sticking to that number. Great cast, storytelling, acting, special effects, blood and gore and music by the film’s director and composer in Michael Giacchino. Werewolf by Night stars Gael Garcia Bernal, Laura Donnelly, Harriet Sansom Harris, Kirk Thatcher, Leonardo Nam, Daniel J. Watts and Eugenie Bondurant.

**Other Marvel suggestions: Moon Knight and WandaVision for weird and unique this season.

Forgot to show this and it deserves its own post: A Bram Stoker’s Dracula pictorial movie book in honor of its 30th anniversary last Sunday.🩸
Which is your favorite? 📚🧪🔮🧑🏻‍💻
Vampyres. Found on tumblr.
Which way do you identify this film? Deep Red or Profondo Rosso?
One of my favorite topics to talk about in horror is color theory! New post, link in bio. ✂️
Callin all vampires! Happy Halloween 🎃🩸👻🔪🧡