I also dislike youtube but the majority of the time, I like it. I got the inspiration for this post based off a few trending videos based around this topic of things we might have been influenced by as children that created some trauma. Not in the tragic definition of the word but more so things that have stuck with us as children into adulthood and through media, books, etc.

The youtube channel Wendigoon had a video about this topic and what’s funny is everything that terrified him, I absolutely loved as a kid! And that inspired me to do this in a writing format. I might also be a little older than he is so that is a big change.

I’ve said before that horror was a huge part of my childhood and yet more supernatural/paranormal things that happened to me a kid is more terrifying than a masked killed in some slasher but looking at everything on paper that I could think of that I watched or read as a kid and thoroughly enjoyed, I will say that there are things that stuck with me harder.

So let’s talk about my personal childhood horror… moments? List? Era? We’re going with era. ALSO, the cut off point for me will be before high school, maybe even before or around middle school times.

As a kid and even now as an adult, I’m a big fan of reading. And I read two prominent series and both are published from Scholastic: Animorphs which I own a lot of the original books from those k-mart days but the other is RL Stine’s Goosebumps.

The covers of both are exciting but Goosebumps is the one that would make or break me to read. I’m looking at the covers I have now: The Blob That Ate Everyone, The Curse of Camp Cold Lake, The Curse of the Mummy’s Tomb and How I Learned to Fly (my only sets from my personal collection prior to goodwill), versus the covers I remember vividly like Deep Trouble, The Haunted Mask, Night of the Living Dummy, A Shocker on Shock Street, and Say Cheese and Die!

Now with the books comes the tv show Goosebumps and the other countless horror for kids (and adults) content that I consumed as a child. Are You Afraid of the Dark? has more of a bigger impact than Goosebumps (on me) and I think a lot of that comes with execution and special effects and perhaps a slightly bigger budget? Goosebumps is for kids, it’s geared towards it and there are some highlighted episodes that make the series worth watching. AYAOTD is like young adult horror and that fascinated me more.

I’ll throw in many episodes of Tales from the Crypt being something I watched and also Michael Jackon’s Thriller. I remember seeing Thriller for the first time as a kid and I was fascinated and also terrified which was the point of it. I got a little paranoid that zombies were gonna show up in our backyard when in actuality, I saw the occasional rabbit.

Another underrated series to mention is Animal Planet’s Lost Tapes. This show is a mix of cryptid talk meets supernatural meets found footage meets creepypasta before creepypasta was a popular thing. I LOVED this show, I’ll occasionally watch it on Discovery+ and it’s nostalgic and a big cheesy and tame at times but I can see how if you were a kid and saw those episodes, it’s a big scary. Like a few favorites of mine are Dover Demon, Jersey Devil, Bigfoot, Cave Demons, Zombies. I was fresh out of high school when this debuted but worth mentioning. This show is what scared Wedigoon as a kid and I can see it!

And we know about Bravo’s 100 Scariest Movie Moments, this was the best thing ever!

Film wise, we got a nice variety here. I can’t remember which one it was but my earliest moment of watching a scary movie was one of the Nightmare on Elm Street films. Again, not scary to me. There were also countless reruns of this movie called Freaked, it played a lot on HBO and I think Alex Winter is in that film.

But one movie that did scare me as a kid (and then bought the board game of it and played it) is 1995’s Jumanji. This movie isn’t a horror nor claims to be. It is a fantasy, action/adventure film starring the late but great Robin Williams and if you don’t know about what happens in this, you missed out! The original (first) had these moments of pure terror and having consequences. I think that’s the moral of this film, you do things, things happen because of it. 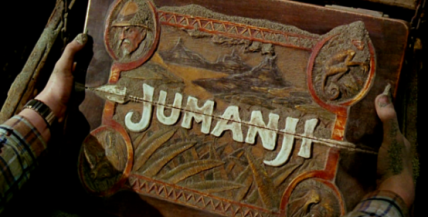 One scene that stands out is when Judy and Peter start playing and the line reads “His fangs are sharp, he likes your taste, your party better move, poste haste.” This entire scene scared me because of the set up, the lighting and just the tail flicking around the piano keys. And then you see those HUGE paws and slowly, the lion emerges and if I were either Peter and Judy, I would have screamed. That lion looked real to me! The noise and the scene is playing in my head right now and I’m still really impressed with the special effects and animatronics used. “It’s not real Peter, it’s just a hallucination” cue lion ROAR.

Sidenote, I just rewatched that exact scene on my phone and it’s still just oh God.

This whole movie in general is something that heavily affected me and the more I watched this movie, the more I fell in love with it. It falls in the same category of Pinocchio; great movie and storytelling but as a child, it was traumatizing and until you get older and realize the magic these movies held.

I got off tangent, but I had to share that with you! Films and tv shows that are meant to scare you and are geared towards it, more misses but some hits and the opposite for those that are family/fantasy/action adventure for me.

My upbringing was a bit flexible for me when it came to like content or media I consumed. If I wasn’t being heavily affected by it or scared, it was okay. I mean, I was checking out and renting horror movies at Blockbuster and other video rental stores and spent a little time being very picky about what to rent. Perhaps I was heavily desensitized to anything spooky but looking back and thinking about my childhood, yeah, I loved horror as a youngin.

Just had a flash of me at my old church as a kid and they had a spooky haunted house upstairs. Masks, really scary looking masks, fog machine, spooky music and decorations, I forgot all about that.

What was your childhood like when it comes to horror or all things spooky?