With the current pandemic of 2020 still affecting us, it got me to think about movie theaters. Now granted, movie theaters have been in the news recently during the current pandemic and whether or not they will survive, I feel they will. I think we miss the entire movie theater experience, which is what this post will be today. We miss getting scared together, crying together, meeting fellow fans and for one sitting, the entire real world doesn’t exist and we are all immersed into what is on the screen.

Today, I wanted to go down memory lane and talk about some of my early horror movie experiences. I did make a nice little list/reference in my journal and some might surprise you. The majority of these are when I was in middle school into high school. I was born in 1987 so you can do the math of how old I was when I was going to these theaters to see these…

The first film, by year but I cannot recall when I saw it, is the sequel to I Know What You Did Last Summer… I STILL Know was released in 1998, a year after the first film. I do remember the “hype” around the first one, the book by Lois Duncan was out there and I believe I had a version or the movie book. I think deep down I was excited to see Brandy in this movie. I had seen the first one MANY times (might have seen that in theaters too) and the cast in the previous film were more believable and likeable. I think it was

The second film is Halloween H2O, also released in 1998. Now this movie, I remember how I felt during the film. How the audience felt, which was packed by the way. I remember how tense the theater space got when Michael had found the school and was chasing Josh Hartnett and Michelle Williams. That moment when Michael and Laurie saw each other and that head tilt, the audience went crazy.

Another film that I would throw into the horror category (but also fantasy and action adventure) is 1999’s The Mummy. This movie is fun, funny, there are some horror elements and moments in the film, and overall, it’s a good time. There was a brief moment where I, like everyone, was obsessed with ancient Egypt and then grew out of it only to get back into it as an art major. It’s very similar to Jurassic Park, everyone wanted to be a paleontologist. Still to this day, I think the concept and ideas and visuals for showcasing how powerful Ihmotep is still cool. Using his face with sand and the moans and groans? And let’s not talk about that booby trap/salt scene. BTW, we also saw The Mummy Returns. 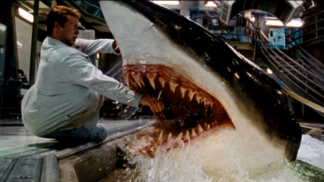 Also in 1999, Deep Blue Sea. Remember that? It was before Sharknado but long after Jaws. Again, another fun movie but boy the special effects aren’t that great. I went with my grandmother who took me. I also believe her sister (my great aunt) and my cousin(s) were also present too. I do remember sitting in the back and they were more towards the front. I also remember being very much into the song LL Cool J did for the film. My God. The audience reactions were definitely positive and fun, no one expected Samuel L. Jackson basically gets it and gets it badly.

2004, my sophomore year brought the remake of Dawn of the Dead, directed by Zack Snyder. I was aware this was a remake but you know as a kid, especially in the 2000s, getting access to older movies was just not as easy as it is now. Thanks to streaming and thrifting or even buying dvds and blu rays, are we now able to watch films from the past, especially if they are the original to a remake. I remember there were debates on which one is better, the hype that the dead were now more faster which makes them scary. I loved seeing this one in theaters, I do currently own it on dvd (along with Land of the Dead double feature set). The end credits were new for me as well. Intercuts of the film were still going even after people started to get up and leave. I stayed around to watch the survivors arrive at their island destination only to find it inhabited by zombies. The scariest shit ever.

Hellboy was 2005. All alone by myself because the rest of the family (mom, grandma, aunt and great aunt) wanted to go see Tyler Perry’s The Family that Preys, which to be fair, is the only Perry film that I really like. An action/adventure, comic, fantasy, horror movie that had great practical special effects and I liked every bit of it. I still enjoy Hellboy. I should watch the new one but it didn’t do well and nobody was really asking for more Hellboy in my opinion.

But let’s talk about the last recent experience which was last year. I went to see Us, I did enjoy it but that falls into the “it could have been better” category. The reason is that there was a group of maybe teenagers, possibly in their late teens being a little loud. Ironically when the movie really kicked in and scared them to death, they were quiet for the rest of the movie. Us as a whole is one of my favorites of 2019, well acted, just tense and creepy enough to get under your skin.

In the end, thinking of these earlier movie moments made me miss the theaters a bit. You don’t know how an audience will respond to things. The smell of buttered popcorn, the noises of people not turning their phones off or bringing in a baby, WHY WOULD YOU DO THAT. Okay the last two I do not miss but it’s the enjoyment of being around other people who are on the same journey as you and may feel different as soon as the movie ends. What horror movie(s) were your first theater experience? I’d love to know!

One thought on “The Movie Theater Experience(s): the horror edition”