Wow guys! I wasn’t expecting this list/previous post to get a lot of hits but I am thankful for it! If you missed numbers 50 through 25, please click here or visit the blog in its entirety to check out other posts that might tickle your fancy!

From here on, let’s check out what concludes my list of favorite horror movies! And then at the end, there’s a fun calculation section of what is the favorite decade, genre of horror, just things about my taste level.

Let’s start with number 24 in the final conclusion of my top 50 favorite horror movies. 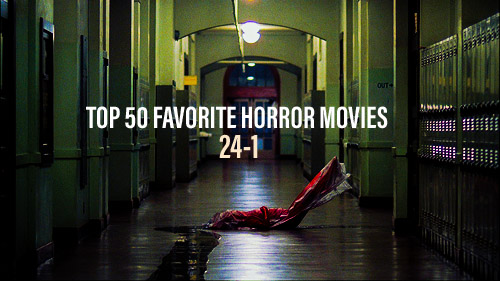 My top 50 list is complete. Now if I did 100, I feel like a lot of the films would change around a bit because of that flexibility. But these are all films that I love watching even as background noise, I thoroughly enjoyed them or they stayed with me long after watching and to me, that’s a big win.

I liked doing this list, I plan on doing more because sharing films is great. I want to expose you to films you might not consider or heard about and vice versa! Share films with me here or on the instagram page in some form.

Now that we’re done, what movie surprised you to be on the list, high or low? What would you include or take out? What’s on YOUR list?