It’s hard to think about your favorite movies, let alone horror and THEN rank them in some kind of order. I’ve avoided this topic because it’s too hard, however, I had been watching quite a few yt videos of other horror fans ranking their own and if they can do it, so can I.

There are some rules:

I did not include sequels and they will get their own ranking list. Also know that these are MY personal favorites and things can change. Also since these are just 50 and not 100 so if there’s a film that you like/love and it isn’t on here, most likely it’s 100-51. So expect to NOT see Halloween, Jaws and The Thing or The Shining are not in the top 50 but most likely just below it. I love those 4 movies, I’m a fan of them but my list is quite different without those present. But just know that ahead of time, they are on a bigger list.

Let’s get into the ranking starting with number 50! 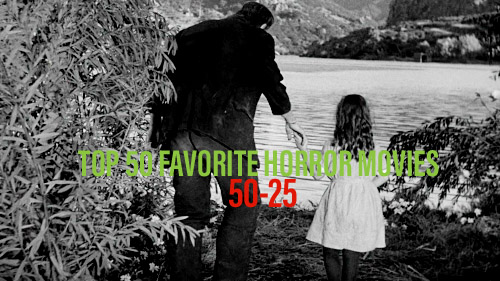 Coming Saturday… stay tuned for numbers 24-1 to see who ranks at the top! Or even the top 10! The rest of the list will probably be kind of controversial because… some big  horror favorites are not there! Oops. Not oops. It’s my list, my opinion and mine are going to be different than yours or similar.

So what films are in your top 50? Let me know in the comments below!