Directed by David Ian McKendry and Rebekah McKendry, a film released in 2018 is showcasing multiple stories around a popular holiday. Sadly, this is a Christmas anthology film that needs an execution punch. 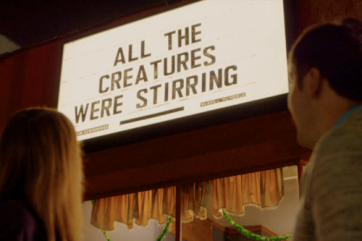 I go into these films with an open mind so I don’t have big or low expectations, I just wanna see what you’re going to present. And this film… there’s so many things I kinda don’t like about this movie but at the same time there are some ideas that work really well and some do not. Like mentioned, this is an anthology so about 4 stories minus the prologue/intermission/epilogue with our couple on their “date” could count as one so in that case, 5 stories.

The premise is that this couple are on a date at a theater, where there is a… almost art film type of play based around the poem “A Visit from St. Nicholas” and 3 actors are transitioning what is to become the stories on the screen.

Out of the 5 different stories, only two in my opinion, were executed well and I wanted more of it. The second story, “Dash Through All” is my favorite one. The plot is that we have a dad who is the last shopper to leave a store (perhaps a couple of days or so prior to Christmas) is locked out of his car and encounters two women in a van who have a darker secret. I won’t spoiled the rest but it seemed this segment, the acting was good, the script for this segment was solid and the special effects were great. We knew something sinister was bound to happen and when it’s revealed, I think the possibilities are endless with the plot of that segment. It could have been a longer segment in my opinion, like… what happens after? Does he find someone? How soon? What about his family? What are the origins of the… evil? Also, the big bad was cool looking.

The other segment that I enjoyed was “In A Twinkling” which starred Constance Wu. I really liked the strangeness of the segment. It definitely threw you off on what was going to happen and when it did, there was comedic timing, it gave Twilight Zone vibes. Because it was bizarre and jarring is why it worked for me. I didn’t expect the segment to be what it was and again, I could have used more of it. The other protagonist mentions that it happened every year for ten years, so what was the first experience? How bad it go? Why him? So many unanswered questions!

The other segments, “The Stockings Were Hung”, based around an office holiday party would rank third place. The other two, “All Through the House” (a take on the ghosts of Christmas pasts) and “Arose such a Clatter” (a reindeer revenge?) were definitely the weaker ones. Especially the latter. I had to question what was the budget? It’s just the execution for those were great and perhaps they spent the most of the money on the only two I enjoyed? “Arose such a Clatter” could have been really interesting if it wasn’t for that sad, stuffed reindeer. You know what it reminded me of? Jack Frost. The b-movie Jack Frost, not the one with Michael Keaton. It took me out of that world and I didn’t buy into it.

And what was the ending? I still don’t understand! The couple was the latest victim in the play? Or was it just the woman? Why was the creepy older guy just smiling away at  her? Is he Krampus? Or Santa? Is everyone in on it but her like a Hot Fuzz situation?

In conclusion, All the Creatures were Stirring is not great. It’s got its moments like I said, but this isn’t Trick r Treat or Creepshow where it’s done to the best of its ability. They dropped the ball on this film.