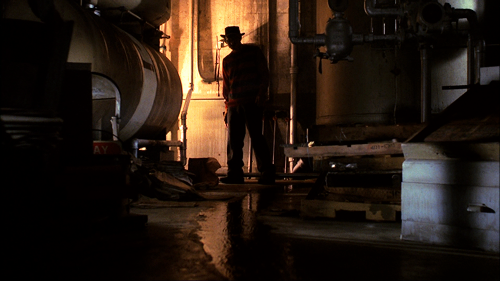 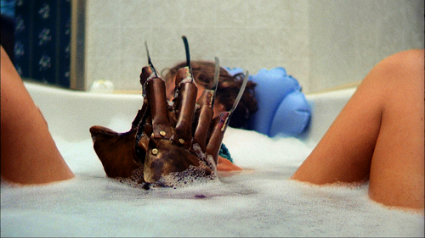 ANOES (as we like to shorten film titles) is not Craven’s first rodeo. He had done The Hills Have Eyes (1977), The Last House on the Left (1972) and Swamp Thing (1982) prior to going to a surreal world where reality and dreams co-exist on screen.

And that’s the real magic of this film, it’s the play of “is this real, is this a dream, is this happening” questioning throughout it. And also that you rarely see Krueger in this and yet his presence is major, big. But you don’t see a lot of him. ANOES is a perfect example of keeping the boogeyman in the dark for as long as possible.

Let’s start with the obvious, A Nightmare on Elm Street is a great horror film. It really showcasing the talents of Craven, despite this being his 4th project but I feel as if this is witnessing more greatness to come (aka Scream). The tight is script, the acting is great and believable, you believe these actors as teenagers and the special effects… don’t get me started! The special effects are the highlight of this movie.

If you haven’t seen any footage or behind the scenes look of how they created some of these iconic moments in ANOES, you need to stop reading this, go to youtube or something and see it for yourself. It’s impressive and the fact that a lot of it still holds up today in 2019 is very remarkable. One of my favorites is actually the scene were we see Nancy sleeping in bed and above her is the silhouette of Krueger pressing through the wall before disappearing and… to think that it was created by a new fabric (spandex) is so crazy. That’s the play of reality or dreamland and that scene is an example of that.

Of course everyone knows about Tina’s (Wyss) death scene and how they shot that sequence, a rotating room isn’t a new idea, it has been done before. Royal Wedding (1951, starring Fred Astaire), 2001: A Space Oddessy (directed by Stanley Kubrick), The Fly (1986, starring Jeff Goldblum and Geena Davis), Poltergeist, Inception (2010), Interview with the Vampire, these are films that use the rotating room to its advantage to showcase more of what the story/plot entailed.

*bonus: NSYNC used this concept in the music video “Bye Bye Bye” off the album No Strings Attached, 2001.

I got so off track here, let’s talk about the cinematography and all the goodies that come along with it. Even the cinematography is great and again, it goes back to the tight script and Craven’s directing and the vision that he had for this film. It’s all under his direction but Jacques Haikin did a great job. 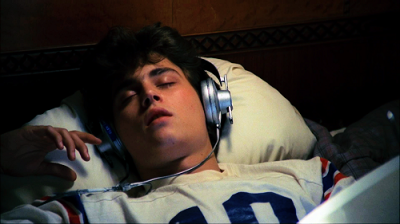 A Nightmare on Elm Street is in a class of its own when comparing it to the sequels. I will include ANOES 3: Dream Warriors and Wes Craven’s New Nightmare as a “trilogy” and there is a beginning, middle and end if you look at it that way. The character Nancy (Langenkamp) is heavily involved in all three and it is basically about her and the impact of a character she is to the franchise.

The other sequels: Freddy’s Revenge, The Dream Master, The Dream Child and Freddy’s Dead (excluding Freddy vs. Jason) lacks that… originality and magic that the first one had. However, there are some very cool moments within those as well and we will soon get to those later films to talk about in the future.

In conclusion, A Nightmare on Elm Street is beautifully shot, it does a great amount of mind fuckery on whether or not things are really happening or is it a dream and who would have thought that this was all based off a true story?