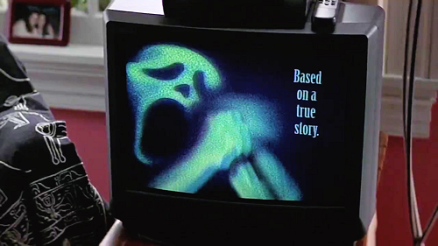 Kevin Williamson is making another appearance on this blog. As well as Wes Craven. Both will definitely pop up more because whether you like it or not, both have helped shaped horror into what it is now (Craven with the cult film The Hills Have Eyes, The Last House on the Left and A NIghtmare on Elm Street that helped New Line Cinema become what it is and Williamson who would also involve himself with original Scream, The Faculty, Dawson’s Creek and eventually The Vampire Diaries).

Scream 2 is possibly my personal favorite sequel in the Scream franchise. 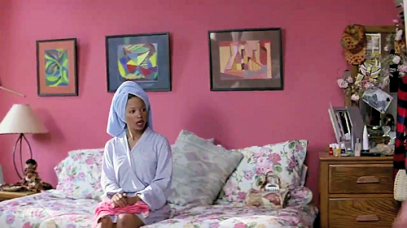 Now to proceed with showing my age. I remember MTV doing this special with the cast of Scream 2 and it was either at a lodge or a cabin with snow and they were showing music videos/clips that were in the movie or on the soundtrack and this is what I miss about these movies from back then. You were incredibly invested/engrossed in these movies with a lack of internet not really being a thing. You had to watch television to get information, to see special programming and MTV definitely hyped it up. It is a teen horror movie and that was very rampant during the 1990s.

I also saw this on PPV (pay per view) for the first time and fell in love with it. How crazy that PPV was actually for films and not just fighting exclusives.

As I re-watched the film just to get re-familiar with the cinematography and whatnot, the opening with Pinkett (Maureen) and her murder scene, her climbing up those stairs in front of the theater screen and behind her is the famous “ghostface” mask on the screen and it’s so… poignant to the audience.

Throughout the film, I noticed that I enjoy the lighting, the color or color combinations (i.e., Cici, played by Gellar, at the sorority house sitting on a red sofa with blue pillows, the play rehearsal scene where the seats are almost the same type of color and texture of the couch but there are closeups of the background actors in their masks, Sidney (Campbell) drenched in red), anything that is an eye popping color, it stays that bright.

I also think New Nightmare (1994) was a definite “try out” for Craven to later do Scream (especially Scream 2) which is very meta, based off of “real events” and now watching Scream 2 again, I definitely see some easter eggs of that theory. So I’d suggest you’d watch A Nightmare on Elm Street first, then New Nightmare followed by Scream and Scream 2 just to understand where I’m coming from.

Basically I cannot wait to get to the Elm Street films, they are so fun and memorable and some have great use of special effects. I checked and I have at least 5 movies to get to before we get into our dreams and meet Freddy.

Until then, remember that Scream 2 is a great horror sequel, that’s rare to find in horror where the second or third can reach or even be better than the first. I can think of possibly Evil Dead 2, ANOES 3: Dream Warriors, 1978’s Dawn of the Dead, Aliens, The Devil’s Rejects, there’s probably tons more that I cannot think of but there’s a handful there.

Basically, this a tight script. It pays off. It does take some risks with killing off some beloved characters but not for shock value but to push the narrative. Good kills, good scares, emotional draw and it definitely feels more mature, compared to the first film. Obviously these were teenagers then but even in the second one, being college, you definitely felt as if the characters themselves were more serious, more aware, glimpses of comedic timing but it’s not overdone, more “woke”, mature.

Maybe that’s why I really enjoy this one and not so much 3 and 4.

Scream 2; worth the watch for sure.