It’s been so long since I’ve sat down and watched a new movie.

I did some calculations and the last time I watched a film, it was July and it was Piranha which I also reviewed and you can read that here! So there was definitely a break, unintentional and trying to up myself from ALL the horror content I absorbed last year is wearing me out. So movie watching is on the backburner and whenever the mood hits, it hits.

Thankfully, Shudder had plenty of options (I also looked on Prime) and I came across this film, kind of recognized the title and I think I saw this movie featured in a documentary or perhaps on youtube in a list.

Surprising little film from the 70s that I think is highly underrated, we’re going to talk about 1976’s Burnt Offerings. 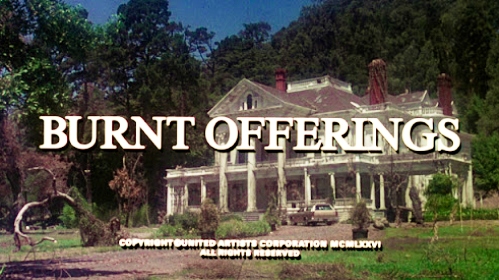 First off, I saw Karen Black’s name and the last thing I really watched with her in it was Trilogy of Horror and then pleasantly surprised to see Bette Davis, the ICON, in this feature as well. Rounding out the cast is Oliver Reed (The League of Gentlemen, Oliver!, The Three Musketeers, The Brood and Gladiator), Lee Montgomery, Eileen Heckart (The First Wives Club, The Bad Seed), Burgess Meredith (Batman, The Sentinel, Rocky (II & III as well), Grumpy Old Men and various episodes of The Twilight Zone) and Anthony James to round out the cast. 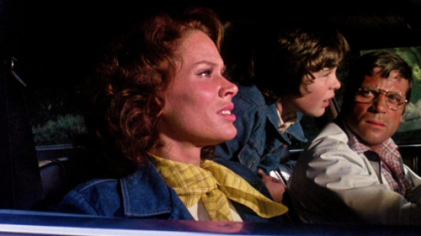 It’s an impressive little cast and we spend a lot of time with these characters.

The plot as I gathered without giving spoilers is we have a family who are going to be renting out a home during the summer and they get way more than they bargained for. On the surface, it sounds pretty basic but now entering some spoiler territory, it’s clearly a set up. A pair of siblings, played by Heckart and Meredith, the house becomes “alive” as the family moves in, gets settled and the residents start to change.

Marian (Black) starts taking on a new identity, she takes on the role of being an upkeeper unknowingly becoming possessed and obsessed and her husband Ben (Reed), experiences repeated trauma from his childhood, seeing a “grim reaper” type of man driving a hearse and turns violent towards his son in the pool. Ben’s Aunt Elizabeth (Davis) goes from a very active, lively painter to then starting to age and age and grow tired before she dies. The son Davey falls and hurts himself, suffers a horrible accident with a gas heater inside his room and as bad things happen, the house seems to repair itself.

Sidenote: the house used for filming is the same house featured in Phantasm.

Everything bad that occurs in the home or on the property, the house gets better and fixes itself to blooming gardens, a lightbulb repairs itself, the gardens around the pool are aesthetically more pleasing.

I enjoyed the atmosphere and build up to the crazy ending I wasn’t expecting. The acting was good and underrated, the cinematography and lighting had interesting choices. Pacing was a big eh at times but it’s a little hit towards the film.

The film also carries this 70s trend of supernatural based horror involving families like Carrie, The Omen and The Amityville Horror) but also it lends a lot of nods to haunted houses and while I was watching this, I thought about The Shining as well. That film was released in 1980 but I’m sure the shooting was in 1979 or a little before that. But even the novel is similar is a “haunted location, family isolated, supernatural events and possession occurs” was released in 1977 by King so yeah, it definitely was a trend.

The ending was well worth it.

Without too many spoilers, the title of the film dawned on me with how the film ended. And with that, I will give Burnt Offerings a solid 4 out of 5. I think it’s underrated for 70s horror, and if you liked a haunted house, supernatural vibe, please check this film out and the cast. It was directed by Dan Curtis (he also did Trilogy of Horror) and is available on Shudder.

Posted last week, some of my favorite films featuring demons.
Aquatic Horror is the topic for the first post of 2022. Wow. What are some of your favorites?
What are some of your favorite anthologies? 📺
Atmospheric horror is tonight’s topic. A great example is The Thing (1982). Link in bio to read!
Decorating for the holiday and wondering what are some holiday themed horror to check out this year? 🔪🎅🎄
ALL WILL BE CARVED. Be safe out there today 🦃