From the jump, I’m gonna say I had unexpected fun with this movie.

I like when movies pleasantly surprise me, especially when my expectations are very, very low. That was the attitude I had going into this. I am a very indecisive person when it comes to watching movies and I was like “okay let’s watch this!” and I ended up having a great time.

The 70s, well late 70s are in full effect though for some odd reason it feels more 80s to me but I’m gonna talk about a lot of positives and a little negatives or nit picks on this cult film. 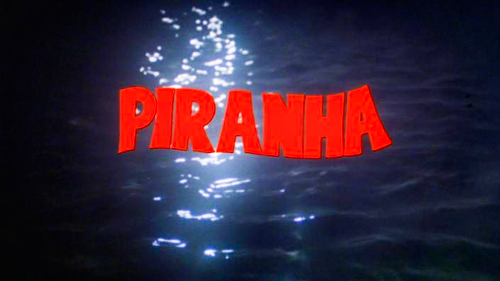 First off, I don’t think this is a Jaws ripoff. Is it heavily inspired by Jaws? Of course, a lot of creature films post Jaws (or Jaws 2) were immediately put up against that summer blockbuster. I mean, look at Orca? Again I see Orca as its own entity.. I mean he was pissed and ruthless and smart to go after one person and one person only. Everyone else was collateral damage. But back to Piranha, is a film directed by Joe Dante (The Howling, Gremlins, Explorers, The Burbs, Small Soldiers), where scientifically and genetically altered piranha fish are threatening the many lives and residents of a resort. The only similarity I saw was comparing the mayor of Amity to Dick Miller’s character Buck Gardener and the idea of opening a lake side resort to opening a beach prematurely. 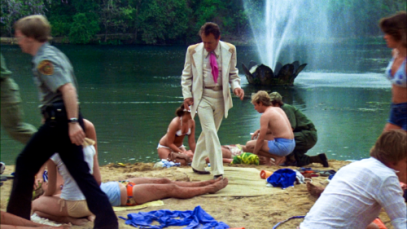 What I immediately loved about this movie is that it doesn’t come back. I think because it is a low budget film and has the “cult” status around it, it spent the money where it needed to; the special effects of the piranhas, the attacks and the gore/bloody aftermath. They don’t cut away and leaving it to the imagination, no, they are going to show every bite and jerk and eventually killing of many characters or injuries to show how brutal and relentless they are. The piranhas are the highlight of this film.

I also liked the characters as well. I recognized names/faces in horror as well as a certain blonde camp counselor who is currently playing Nikki Newman on the soap opera The Young and the Restless (Melody Thomas Scott) and pleasantly surprised to see her. And yay, she lives! But overall the acting is hit or miss, but in my opinion, more hits than misses. The acting isn’t perfect but you know, I’m not too mad at it. Besides Scott and Miller, I also recognized Barbara Steele from Black Sunday fame. She still looked the same, just a little older

Funny thing that came across my mind watching this movie was the scene when the characters Maggie and Paul are exploring the laboratory/pool compound and we see some creatures roaming around and hiding and all I thought of was the movie, The Gate (1987). It’s the weird claymation style that made me see similarities.

One negative that I have is not a lot of character development. This movie isn’t about that or the characters, it is about the piranhas. I mean, we have little moments with Paul’s daughter gaining courage to get into the water and help her peers as much as she could aaaaaand that’s about it.

And I’d like to know what Universal saw that warranted them to try to throw a lawsuit at Piranha like… these are not the same movies. You do not own or control ALL movies that are about creatures in the water. Thank goodness for Spielberg just being like “it’s cool” and it was dropped. Piranha is NOT infringing on your franchise of Jaws. Before Jaws there was Creature from the Black Lagoon, you can create and be inspired by but I read about that potential lawsuit and rolled my eyes.

If you love creature features where you’ll be submerged in water, please check out Piranha. It stars Bradford Dillman, Heather Menzies, Kevin McCarthy, Keenan Wynn, Barbara Steele, Dick Miller and Belinda Balaski and is of course directed by Joe Dante. I would give Piranha… 4 out of 5. I had fun and when I have fun and the movie doesn’t bored me to death and keeps the momentum going, it tends to get over 3.5.

It is currently available on Amazon Prime, Crackle and Sling TV if you have subscriptions and you don’t have to pay.

Shoutout to the Jaws game being featured in the movie towards the beginning, too.