The year of countless, very cool, and underrated horror movies and also the year I was born in. I’ve thought about doing this for a while but not entirely on a “here are movies from the year I was born, go watch them” angle, which is kind of present but not. I always find it interesting to see what songs were popular, number 1 during the year (or decades) people are born, it showcases a lot of what was happening pop culture wise. And like I’ve always thought, horror is a great representation of what a decade or year was based off the content we get on screen.

There are quite a lot of popular movies that I’ve seen and there are some that I want to see and can I find them? Let’s talk about it. 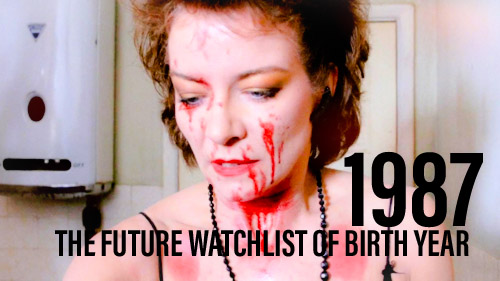 I googled “horror movies of 1987” and got a wide range of movies. There are at least 10 that I wrote down that I have seen/own in my collection and they are:

Now these movies have something in common that I didn’t realize til now: supernatural/paranormal/creature films. Maybe that’s why I’m very much into those sub genres… minus Stage Fright and Opera, ironically both are Italian horror, the rest fall into that category and to me, they reach various demographics. Younger, youth driven crowd like The Monster Squad, The Gate, maybe The Lost Boys and Dream Warriors, and then we have more action pack like Evil Dead 2, Predator, Jaws and some unique films with the vampire western Near Dark.

Among this list above are films that I haven’t seen before or in its entirety since its easy to come across clips or gif sets from these films without actual context. I see that Slumber Party Massacre 2 is there but I haven’t seen the first one, just heard a lot of things about it. Same goes for Prince of Darkness, The Stepfather or Aenigma by Lucio Fulci.

One of these days, I will get back into watching films more, specifically these and I see that some of them are easily available right now through Prime (haven’t checked Shudder or else) and take full advantage of them being available. I have been struggling mentally since last year and it’s been very, very difficult to do what I have been doing with this blog but I am slowly getting back into the groove of things.

I don’t know if I can top 70+ films like I did last year but if it means checking out some of these films that I’ve LONGED to see, I’m up for the challenge.

What movie(s) are from the year you were born that you would like to see? Or suggest for me to check out?? Leave a comment below!

Happy Father’s Day ❤️🔪
I was in a re-organizing mood today.
Night (or Curse) of the Demon is the second Jacques Tourneur film seen this year (after Cat People). I reviewed it, on the blog, link in bio. Have you seen this black and white classic?
Underrated but fun 80s film April Fool’s Day is reviewed on the blog. Have you seen this movie? And what did you think of it? 🔪
1987. The year i was born but also the year of some great horror films. On the blog I discuss films of that year that I have seen and listed those I haven’t but want to.
When Mother Nature strikes... some of my favorite movies where the elements or animals care just against you. Link in bio!