I had done something similar to this with animal related horror. But I wanted to do something a little different. Now, with this list, these are my choices, my opinions and what I have seen so far. There are some movies that can go here that I haven’t seen like Frogs or The Swarm, more current sequels or remakes that I’ll eventually get to. But for now, just these top 10. As for being an option or thought of, I gave myself 2 rules to follow: either it is plant or animal focused or the environment plays a bigger role (more antagonist/neutral) in the overall film.

Let’s get into my top 10 favorite mother nature horror films!

10. Lake Placid (1999) – The writing is questionable, so is the acting (minus our golden Betty White) but the Stan Winston (and studio) designed crocodile is still amazing to see on screen.

09. The Birds (1963) – Classic Hitchcock, I’m still personally scarred by the scene of the man’s eyes poked out and missing. And why did the birds act this way? We’ll never know. 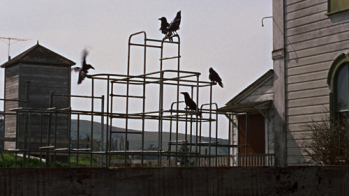 08. Deep Blue Sea (1999) – Saw this in theaters, I remember everyone had a reaction at Sam L Jackson, and Deep Blue Sea walked so Sharknado could run. “It ate him!”

07. Orca (1977) – Underrated cult film. Underrated with a capital U. In a post Jaws world, we were given Orca and this killer whale is P-I-S-S-E-D. There are no human heroes, we’re rooting for the whale.

04. John Carpenter’s The Thing (1982) – Great score, like the acting, the writing, the special effects are some of the best ever in my opinion. The isolation, the growing mistrust, being threatened by nature AND men on top of that? Great watch. I’m glad it’s being more recognized.

03. Piranha (1978) – This is all out fun. If there’s a film I could rec from this list highly, it would be this one! It’s got the cult status, it’s ridiculous but Joe Dante is behind the film and we love Joe Dante on this blog.

02. The Evil Dead (1981) – The ultimate cabin in the woods movie. We know this movie, we’ve seen this, we love it. It is more horror than comedy so if you’re interested in more comedic angles, go to Army of Darkness. Evil Dead II is a good mixture of the two genres in my opinion.

01. Them! (1954) – A favorite watch from last year, gigantic ants terrorizing deserts to a national level is a fun b movie/monster movie or “nuclear” monster movie to watch. The special effects is quite impressive for the time period it was made for. The large ants are scary and intimidating.

I used to said work outdoors daily, and around different plants and many animals (worked at the zoo) and my level of respect for said animals and nature as a whole is very, very high. And as a former Girl Scout who has camped and hiked, nature is nothing to play around with. You need to be prepared all the time and these movies can either help you or make you not want to hike anymore. What movie would you add to this list or suggest?? Leave a comment! And share this post with fellow movie lovers!

Runner and creator of Shots of Horror here (and previously on tumblr) as a way to showcase and discuss the artistic lens of horror films. View all posts by shotsofhorror

When kids are the focal point in horror (or thrillers), we get discuss and see how the stakes are even higher. Link in bio to read last week’s post!
Today we talk about horror movies that are homebound… which are not The Purge. Link in bio to see where The Changeling, Wait Until Dark and Crawl rank! Link in bio.
The exploration of supernatural and horror themes in young audience’s tv consumption is so fascinating. There are some not pictured like Ghostwriter, Ahhh! Real Monsters, Tales from the Cryptkeeper and more. 👻👽📺🔮🔪
Sat down and watch the very first episode of Disney’s original series So Weird from 1999. I did watched this younger and I have not seen it since it went off the air and I barely remember S3. Though for Disney, this episode was very mature and darker than I remembered so new series to review on Retro Rundown! 👽👻👩🏽‍💻
Tonight we discuss horror movies that utilizes a stage… you’ll be surprised at how many there are! 🎬🎭 Link in bio!
I watched and reviewed the 1976 film Burnt Offerings through @shudder and had some fun with this one. Have you seen this film and if so what did you think? 🏠📺💐