So this movie has been sitting on my shelf for some time, looking at me like HEY ARE YOU EVER GOING TO WATCH ME? A few days ago, I pulled out some of my tapes that I had either never seen or seen in its entirety and this was one of them. It was always one of 2 that were less than 90 minutes.

A movie that begins with a title card of explaining what a “sleepwalker” is. Not to be confused with Michael Jackson’s Moonwalker.

The first review out of two will be 1992’s adaptation of Stephen King’s Sleepwalkers.

First off, I really liked this movie. I knew this movie was something else when I had done a post on the original blog (tumblr) and did the 8 screen captures and despite seeing those, it didn’t hinder my experience. I have to say that the cast is really impressive, especially the main 3 actors that we’re following. Brian Krause as Charles is insane. I’m so used to seeing him as Leo on Charmed and he’s the charming good guy/angel (he can do bad angel, too) but to see more of the darker side to him was so fascinating and alarming at the same time. He played danger really, really well.

Second is Madchen Amick, who plays vulnerable but sweet Tanya. She is the girl next door, very popular, trustworthy and Amick plays her very well. I only knew her from Twin Peaks and I know she’s on Riverdale too, never really watched that but Twin Peaks. You wanted to see Tanya survive and live, especially since she didn’t ask for this and so what if she was a virgin? She’s smart!

Finally, we have to talk about Alice Krige, please. Her portrayal as Mary was so scary. She’s good at balancing a complete psychotic, manipulative “mother” to then turn on this switch and act welcoming towards Tanya says a lot about her character. Krige, I know from Children of Dune (sci-fi mini series), Star Trek and Silent Hill. The relationship with Mary and Charles was more… manipulative than anything. And were they mother/son as in actual blood relation or did he become a sleepwalker because of her? I never got a clarification.

Clovis is the icon of the film. All the cats were great but Clovis (aka Spark) was a great animal supporting lead. 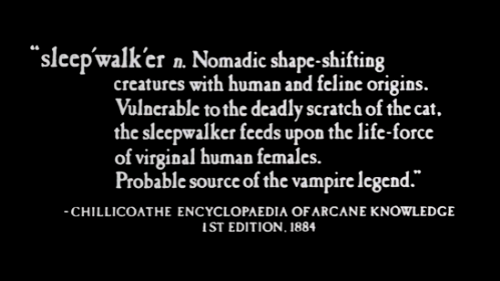 I enjoyed some of the special effects, the look of the sleepwalkers as the creatures and at some times, it seemed goofy (i.e., the scene where Charles is first confronted by Clovis and being chased). They are shifting werecats. The abilities the shifters have, I would like. Invisibility, telekinesis, but I don’t want the energy sucking part.

The direction was great, I think it helped that you had an experienced person behind the camera (Mick Garris) who knows the genre very well and I was impressed by the screenplay being written by King. Now if you guys know, after Maximum Overdrive (King directed and wrote both but high on coke), I was so done. Sleepwalkers restored a little faith.

I’d give Sleepwalkers a 3.75 out of 5. It’s close to a 4 than it is to a 3 or 3.5. I had fun, I’d recommend it, especially if you like “mythology” based horror. It stars Brian Krause, Madchen Amick and Alice Krige and directed by Mick Garris.