As much as I reluctantly got Disney+, I do like the easy accessibility to watch all current episodes of The Simpsons’ Treehouse of Horror episodes. This post is pretty straight forward, what’s my favorite episodes from the entirety of the episodes shown.

But what I really like about these episodes (and overall) is that there’s a lot of risk taking with animation style, colors, angles, and I wonder if that’s because it’s horror based and that genre is all about taking risks and not really caring about continuity or canon aspects but entertainment with comedy and scares. Personally, I think the earlier episodes are better but I will say that the later ones from 2010s+ are not bad at all. As long as horror evolves as a genre and more people are producing them and supporting the genre, The Simpsons isn’t gonna run out of ideas when it comes to the Treehouse episodes.

Outside of that? Who knows! Let’s get started!

4. Treehouse 14, season 13: “We have Send in the Clones”, a story parodying Multiplicity where Homer buys a new hammock that somehow creates MANY clones of him, a story where Lisa tries to do the right then by honoring a dead man’s will to ban handguns (“The Fright to Creep and Scare Harms”  and my personal favorite, “The Island of Dr. Hibbert” (parodying The Isle of Dr. Moreau) and my favorite homage: Homer singing “In the jungle, the creepy jungle, Homer rides a freak”. Said freak is Ned who is half cow. A cow who needed the udders to get milked. Enough said. 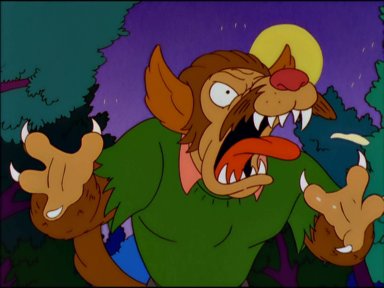 3. Treehouse 10, season 11: It’s 1999, we’re getting into the frantic chaos of Y2K! Do y’all remember that? Were you around for that? If you weren’t, it was a moment. Everyone thought we were going to get blown up, the computers and technology weren’t going to make it, maybe aliens would show up (I’m still waiting) so the last story is almost parodying that whole… shebang. So out of the 3, which is my favorite? “I Know What You Diddily-Iddily Did”. If you haven’t seen I Know What You Did Last Summer, lots of us did in 1997 and there was a direct sequel to theaters and one 3rd one that’s dvd trash, but what I liked is the little twist of Ned being a werewolf and his leisurely night walks. “Desperately Xeeking Xena”, title from “Desperately Seeking Susan” but has nothing to do with Madonna or Rosanna Arquette, this story is kind of relevant today. As someone who collects different Funko pops, Neca toys, being a collector should be fun. Comic Book Guy (as the villain) wants to capture superheroes for his collection, including the Princess Xena (voiced by Lucy Lawless) and how some collectors can get lost in spending $$$ to finish a collection and not just enjoying it, the thrill of the hunt. This was also an episode of the original Powerpuff Girls. And the final story, “Life’s a Glitch, Then You Die” is the quickest “who is your favorite parent” answer heard.

2. Treehouse 4, season 5: In October of 1993, The Simpsons brought to us three short stories; “The Devil and Homer Simpson”, “Terror at 5 ½ Feet” and “Bart Simpson’s Dracula”. Out of these three, Dracula is my favorite. There is such attention to detail in that one from Mr. Burns as Dracula with the shadow being reminiscent of the film but also playing with a yo-yo to then even the music crescendo throughout the story. It’s not an exact music score, an homage is a better word. Of course second place goes to “Terror at 5 ½ Feet” because who doesn’t remember the infamous Twilight Zone episode? Bart on a school bus seeing something no one else sees goes against him, always being the troublemaker and not believing him as a result. Last place goes to “The Devil and Homer Simpson” mostly because it’s the last one left. But the ending? Peanuts Christmas special?? Hilarious. 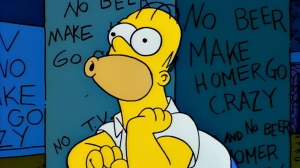 1. Treehouse 5, season 6: A day before October in 1994, these 3 stories are my favorite of all time. “The Shinning”, “Time and Punishment”, and “Nightmare Cafeteria” would rank #1 for various reasons. Let’s start with “Nightmare Cafeteria”. If you have the complete season and love to listen to commentary, creator Matt Groening mentions one thing that sets the Treehouse episodes (this one in particular) apart and I mentioned it before: the angles. And the idea that kids or the main characters should because they are the main and nope, they dead too. “Time and Punishment” reminds me of Terminator 2 and the smiling machine with the hooks is so damn  creepy. “The Shinning” parody is iconic, it’s great, I love the slight nonchalance everyone seems to have throughout. And of course, Maggie voiced by the great James Earl Jones is the icing on the cake. But what’s also underrated is the end credits where the family is turned inside out by some gas seeping in, a nod to “Lights Out”, an old radio talk show?

Treehouse of Horror episodes are the highlights throughout The Simpsons continually run on television. Granted, there are some great episodes highlighted through each season (I like the older seasons), you look forward to the Treehouse episodes.

So which is your favorite Treehouse of Horror ep? Is it one I listed?

Reviewed a random episode from Tales from the Darkside as this week’s new post. What’s a favorite (or many) episodes of yours from the franchise? 📺📼🔮
I watched, reviewed and had fun with 1978’s Piranha. Link in bio! Have you seen this movie? What did you think?
I did a list of movies that has scared me in many ways. The top 10 includes Hereditary, The Exorcist and Tetsuo the Iron Man. 🔗 in bio!
Happy Father’s Day ❤️🔪
I was in a re-organizing mood today.
Night (or Curse) of the Demon is the second Jacques Tourneur film seen this year (after Cat People). I reviewed it, on the blog, link in bio. Have you seen this black and white classic?