It’s been a crazy week.

I went through my handy dandy blue journal to look through previous ideas or movies to talk about this week.

This topic I wanted to do last month but never got around to doing it but I think it’s time to bring up our favorite possession films. Demonic, supernatural, paranormal or sci-fi possession films belong in the sub genre where a subject is possessed or “taken over” by an outside infiltration. It could be demons, evil spirits or organisms such as The Faculty or The Thing. Most would consider just demonic/spiritual possession but I’m gonna be more broad with this.

Let’s talk about my Top 10 Possession horror films. And yes, these are ranked. 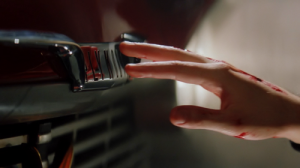 10. John Carpenter’s Christine (1983) – A possessed car. A possessed car who is in love with her new owner and quite possessive about that. A possessed car that with a mind of its own causes many deaths, including the current owner, Arnie. Christine, based off the Stephen King Novel (and deviates from it a bit) is the story about a boy and his brand new car that… fresh off the line killed employees. It’s fun, cool, great kills, the car is clearly smarter than everyone and the effects used to showcase how amazing and scary Christine is, is quite remarkable and still holds up today.

9. Paranormal Activity (2007) – The Blair Witch Project basically gave attention and new life into the found footage genre for the 90s but Paranormal Activity would bring it back to the forefront in 2007. One cannot be mentioned in conversation without the other. Unlike Blair Witch, Paranormal takes place in your town, your city, your neighborhood, in the suburbs. It’s similar to Poltergeist as in “it can happen to you, this is your house.” The film is centered around a young couple named Katie and Micah who at first you think is being haunted by a supernatural entity. Instead, only ONE is constantly being perused and the following sequels explore the history and mythology behind it all. The last 30 minutes of Paranormal Activity is very, very famous. And quite debatable if you think of the alternate endings.

8. Child’s Play (1988) – You wouldn’t think Child’s Play is a possession film but… thinking about it, yeah, it is. An antagonist (played by Brad Dourif), uses voodoo to take the form inside of a doll, a child’s toy, and in order to become unbound, Charles Lee Ray aka Chucky wants to use his new owner’s (Andy) body. He gets close but he never seems to finish the ritual. 7. Jennifer’s Body (2009) – When I think possession films, Jennifer’s Body comes to mind immediately. I’m glad to see that this film is getting the attention it clearly deserved. Megan Fox and Amanda Seyfried are both great in this film as Jennifer and Needy (aka Anita), writing is good, directing is good, both done by women and in my opinion, a little ahead of its time. The 10 year anniversary was just last year and there are recent interviews of the cast and crew talking about their experience filming. Jennifer’s Body is a great modern possession film all taking place in high school.

6. Night of the Demons (1988) – It’s party time for Halloween and you’re invited to hang with Angela, our party host. What happens during this party is basically possession after possession, kill after kill, and a funky dance scene where Angela is showing off her moves and plan a seduction to only… kill. But we cannot talk about Angela (Amelia Kinkade) and not mention Linnea Quigley (Suzanne)! Pink dress, shows some body, likes to hide lipstick in said body… the special effects are fun in this 80s horror.

5. Hell House LLC (2015) – An unexpected addition to this list but I like how Hell House (the first one) uses possession in a fresh way. The clowns. The CLOWNS. If you’ve seen the film(s), you know what I am talking about. Granted, people (well, one really) are possessed but when objects are the subject matter, everything changes. One of the best moments is a man with a camera, one of the clowns looking at the down staircase and when you look back, the clown is looking at you. NOPE.

4. The Evil Dead (1981) – If The Exorcist is considered the grand poobah of possession horror, The Evil Dead is like a little sibling. The film follows its own beat, it’s the poster child for both possession and a cabin in the woods story. The Deadites are just as iconic as its lead in Ash Williams, the perfect antagonists that are former family, friends, girlfriend. The franchise has also launched two sequels (number 2 is my favorite), a remake (which is also great) and a television series in Ash Vs Evil Dead.

3. Hereditary (2018) – At first I didn’t really think of it as a possession film but it is. One of the most earth shattering films I have seen in a while, sticking with me for days after, Hereditary is powerful. It’s overwhelming, doesn’t hold back, and throughout the family drama, there’s a story about secrecy and darkness. How this darkness and secrecy flows from the late matriarch to the daughter, to eventually the children and not by choice is what makes the film what it is. Also the performances of Toni Collette and Alex Wolf (respectively) are huge highlights of this modern possession film.

2. The Exorcist (1973) – The grand poobah of possession films. One of the best films made, including in the horror genre, The Exorcist (based off the novel by William Peter Blatty) is what movies strive to be. We know the history of the film, the behind the scenes, the impact of this film, its legacy but if Reagan hadn’t played with that ouija board, I think she wouldn’t have been possessed. Just saying. This movie is the reason why I will not touch those.

1. Demons (1985) – One of the first Italian horror films I had seen a few years ago (besides Suspiria) and there’s so many great things about this movie. It doesn’t hold back, the gore is great and present, it takes place in a movie theater, the last ten minutes, especially with how it ends. Imagine going to see a film in a theater only to not be able to escape, possessed people are coming through the screen, coming after you and you barely escape by the skin of your teeth. It’s tense, it’s fun, the way possessing happens is fun and there’s one great yet shuddering kill that… still gets to me. All I will say is: neck.

If you want more suggestions, here are my honorable mentions!
Shock
The Taking of Deborah Logan
The Haunting in Connecticut
The Last Exorcism of Emily Rose
The Conjuring

Do you have a favorite possession genre film? Of course there are TONS out there that I have yet to see or watch and this list could easily be redone in the future! Let me know in the comments if you have favorites or suggestions!