If you missed Part 1 of the Top 10 Favorite episodes of Are You Afraid of the Dark, please click here!

Let’s dive right into the final 5 episodes plus the honorary mentions that didn’t quite make it into the top 10 but they are still awesome.

5. The Tale of the Midnight Madness
Season 2, Episode 2
Vink and vampires. It’s another Frank episode and done really well. I enjoy theaters or theatres, especially older ones where the architecture is unique or renaissance/baroque/rococo inspired. This story is about a movie house theatre that is on the verge of being closed because of no business. Our two main protagonists try their hardest to keep their theatre (and jobs) open until they get an interesting offer from Mr. Vink. All he wants is to showcase his films. Sounds like a good idea, yes? You can only imagine what films Vink wants to show and as we see here, there’s a vampire in one. And it starts with an “n”. 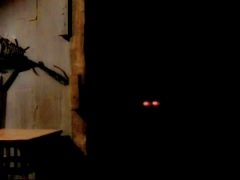 4. The Tale of the Dark Music
Season 1, Episode 11
We do not tolerate bullying, period, and this show tells us that. The Tale of the Dark Music is about a young boy, Andy, moving to a new neighborhood, discovering that there’s something weird going on in the basement. He’s got a bratty sister and a neighbor bully who… to be honest, he can go to hell too. What we all remember from this episode is that huge, creepy blonde haired doll that comes out from behind the door. I remember that clearly. It is something demonic, with its deep voice and red eyes. But also, it’s one of the few episodes that showcases our protagonist as dabbling into the dark side: he tricks his bully down into the basement and the ending is… insinuating that he does the same to his sister. Eric tells this story.

3. The Tale of Laughing in the Dark
Season 1, Episode 2
Zeebo. Nuff said. You mention this show, most likely people will remember this episode and the villain, Zeebo the Clown. This is the second episode in the entire series and is memorable for many reasons. A really obnoxious teenager and his friends are at a carnival where he (Josh) is dared to go inside the laughing in the dark spookhouse and come back with Zeebo’s clown nose. What follows are events of stalking, breaking and entering and Josh being tormented by the ghost of Zeebo. All he wants is his nose back… Betty Ann (and her great stories) tells the story. 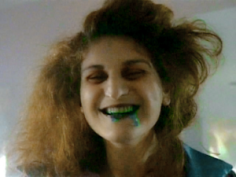 2. The Tale of the Ghastly Grinner
Season 4, Episode 8
It’s the unsettling visuals I remember. Lots of blue… blue and yellow. Basically blue. I like comic books, I like comic book art and anytime we can showcase talent in young people, I’m here for it. We have a young comic book artist who dreams of making it big. And he’s got the talent for it. After being rejected again, he is invited to the opening of a comic book store and offered a “lost” and incomplete comic about the Ghastly Grinner. Apparently, the original artist had gone missing and his niece offers the comic to the young boy. The problem is that the Ghastly Grinner is real and is very terrifying. I would consider the Ghastly Grinner as more of a jester than full clown (i.e. Pennywise, the Joker) and just plain terrifying. He turns his victims into grinning, blue bloop foaming from the mouth (parents, strangers) and it’s up to Ethan (our young artist) and Hooper (classmate) to stop the Ghastly Grinner! Betty Ann narrates this one around the campfire. 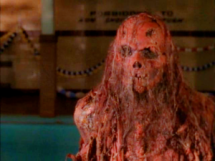 1. The Tale of the Dead Man’s Float
Season 5, Episode 11
The biggest reason why this is number one: the visuals still give me nightmares. I think about the skeletal figure all red in the pool and I shiver still. I’m 32 years old and I vividly remember this episode. It’s no big shock as to why this episode is typically in a lot of top tens, maybe top five. It’s one of the scariest, creepiest, effective ones that AYAOTD has to offer. It’s a ghost story, combined with a swimming pool, graveyard/bringing up bodies for a school and possibly the coolest and scariest villains of all time. The makeup and special effects on the pool ghost is super effective and for a horror television show for a younger audience, this scared the shit out of all of us. Newcomer to the Midnight Society, Stig, tells this one.

AYAOTD Stats:
– 5 episodes from S5
– Frank and Betty Ann tell some of my favorite episodes
– 5 episodes are even, 5 are odd numbered (NOT PLANNED THAT WAY AT ALL, HOW WEIRD)

What were some of your favorite episodes of Are You Afraid of the Dark? Let me know below!

One thought on “Favorites: Top 10 Are You Afraid of the Dark Episodes (Part 2)”

Tonight’s post is all visual and my praise (& critique) of movie posters! What movies do you think have great or not so great advertising? 🍿🎬🎨
The smallest horror pin collection.
I’m back with go to horror favorites to get comfy and cozy with! Link in bio!
Favorite found footage or adjacent horror is the topic this week. Which is your favorite?
Deep dives and underrated horror talked about today. What would you consider to be under the radar horror aka anything not top tier/general public had 0 clue?
Happy International Women’s Day… horror edition.