I was looking through my collection of horror content and one caught my eye… twice: Flix Mix’s release of Boogeymen: The Killer Compilation that came into view. This was released in 2001 on vhs and dvd (I own both) and it made me think about why compilation works and doesn’t work today or even when it came out.

This was one of the first horror media to own and I distinctly got it from KMart (are there any stores left??) and it opened my eyes to horror villains and titles at the age of fourteen. Now at the age of 32, looking at the compilation now makes me go ‘hmm’ aka I heavily question the choices made. 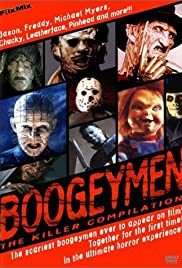 For those who are not aware and haven’t seen it, it’s a very generic, almost trading card like movie that has horror icons or titles that rank in two categories: well known and cult following.

Here’s why this compilation works: If you don’t know horror very well, this is a good place to start. These are more notable in longevity, impact, some are considered classic of defining horror. Some of these are even considered classics. On the flipside, it is introducing you to titles not known or on the lower tiers of horror. The more exposed you are to the different subgenres, the more open you can be.

But here’s my problem: they stuck to a certain niche of horror and I’m curious why. Most of these are “slashers” and a small tiny handful can represent the supernatural subgenre. What was the process here? Yes, the slasher subgenre had its boom and resurgence and it is a HUGE part of horror but what about creature features? Universal Horror? The early faces of horror from the 1920s and 1930s? Zombies? It is ‘Boogeymen’ and I know it’s all about the villain or the face(s) of these titles but…

Clowns were getting popular around this time: the IT miniseries with Pennywise, Killer Klowns from Outer Space. Or how about zombies? Vampires? Witches? Werewolves? Ghosts? Demons? Hell, what about the Deadites from The Evil Dead franchise?

Perhaps it all lies with copyright or trademarks. Perhaps they didn’t think too broadly about their choices. Maybe they just wanted recognizable faces to sell the product.

I think it boils down to age. It hasn’t aged well. It’s almost a time capsule, a victim of its time. I Know What You Did Last Summer isn’t exactly talked about positively, more foreign horror films had been released and went on to become great staples in horror, opening doors. Jigsaw from Saw emerged as a horror icon, and more supernatural or paranormal based films are more popular than ever. The taste level of horror has evolved and will continue to do so. Here’s to hoping a more suitable compilation is in the works.