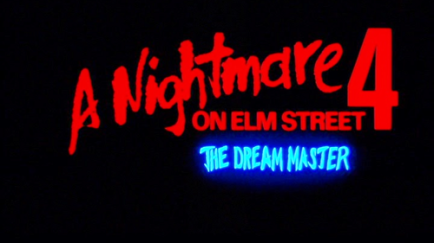 I own it on vhs and dvd.

And this movie, I noticed it this time around, has a lot of neon lighting. Which is a thing in the horror genre, I mean, just the other day I watched Bliss on Shudder and there was TONS of it. Neon + Horror = won’t be going anywhere anytime soon.

We’re gonna talk about the 4th installment of the Nightmare on Elm Street franchise: The Dream Master.

So, Dream Master takes place after Dream Warriors, and has most of the same core teenagers from the previous film. We have a new actress (Tuesday Knight) as Kristen (prev played by Patricia Arquette) but Joey and Kincaid are also around (and they still have their abilities). They are no longer in a psychiatric hospital, living normal enough lives to just be teenagers but Kristen suspects that Krueger is not truly gone. The film evolves into Kristen eventually passing on a “power” to a new character, Alice, and fighting to save her friends. It’s directed by Renny Harlin, his first film, who will also do Die Hard 2, The Long Kiss Goodnight, Deep Blue Sea, The Covenant and countless television work.

Now personally speaking, I don’t mind Dream Master. I like the “dream” trilogy (Warriors, Master, Child), gives us more lore about Freddy but how the town is just sort of trapped in this ongoing cycle of just terror when teenagers begin to remember him. The movies seem to suggest that there is a lull of normalcy, silence and things turn back to being something comfortable and somehow someone remembers something and boom, he comes back. It kinda reminds me of a potential script that was written for a Nightmare on Elm Street featuring the kids of Springwood not remembering Freddy at all and more or less taking advantage of him. I believe Peter Jackson wrote it… or it was a treatment. 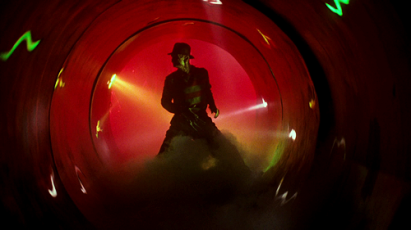 Like I mentioned before, the movie uses a lot of neon lighting, a lot of reds and greens. Actually, the lightning in general is pretty cool in my opinion. I’m thinking of the opening credits with the 1408 house lit up like it’s glowing, or when we see the claw marks on the lockers and it’s glowing as well, that red neon. Alice fighting Freddy at the end, again, more neon coloring. Alice and Dan trapped and the stained glass window motif, Debbie trapped in a roach motel… I can go on and on about this MTV era Nightmare. 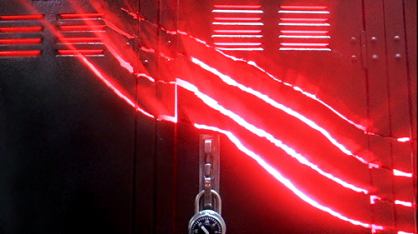 The dream sequences are cool, I kinda prefer Warriors and even Dream Child over the dream sequences in this film. The other two are more groundbreaking and unique. The only one that I do like is of course Debbie’s death and turning into a cockroach and then she’s squished. Probably one of the best in the franchise.

Cinematography is cool, nothing too special but interesting camera angles, settings, background work. The script is alright, the acting is alright, not on the same level as the original or even Dream Warriors but it’s not a bad movie at all. It’s fun, cool, the kills are great, not a whole lot of gore, it’s mostly fantasy gore but it works for the “MTV era” of the franchise.

Stay tuned for The Dream Child and Freddy’s Dead: The Final Nightmare.

I have too many but there’s no such thing as too much! 📼🔮🔪🧟‍♂️📺
Today’s feature film was 1942’s Cat People which is available on @shudder 🐈‍⬛ Have you seen this #rko feature film? What did you think of it?
A fun dive into Hey Arnold having some hidden gems of kids horror on the blog! Link in bio!
Jennifer Check lands in my top 50... link in bio to see exactly where! 👅🔥
Just one film appearance and yet she’s iconic... mother of all vampires, Akasha, makes my top 50 female characters in horror. Link in bio. 🩸👸🏽 🎻
Kirsty makes my list of top 50 female characters in horror! Link in bio to catch up with 3/4 parts up!