My love of horror doesn’t end with just posting and blogs or watching the growing forms of media. It’s also the thrill of finding them on VHS, collecting them for my ever growing collection. Today, I’ll give me top 10 favorite finds, in no particular order and remember that these were found at various thrift stores.

These VHS images are of my own minus the one right below. 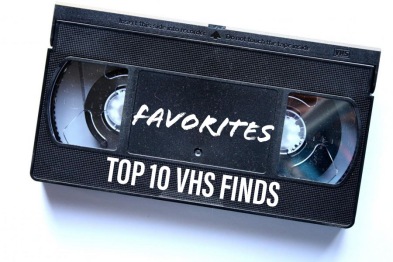 1. Creepers (Phenomena), dir. Dario Argento, 1985
Finding anything with Argento’s name attached is very hard. Believe me, unless you are at a convention or online shopping, you’re not going to find his work easily. Phenomena or also named Creepers stars a young Jennifer Connelly and Donald Pleasence.

2. Dawn of the Dead, dir. George A. Romero, 1978
Prior to finding this, I hadn’t seen this before. I’ve seen Night of the Living Dead as well as the 2004 remake of Dawn of the Dead (Zack Snyder) in theaters. Now, I cannot pick which one I enjoy the most because both provide me with everything I love about zombies. Dawn stars David Emge, Ken Foree, Scott Reininger and Gaylen Ross, and co written by Argento.

3. Phantasm, dir. Don Coscarelli, 1979
I have two different VHS tapes of Phantasm but I prefer this cover choice. A first seen in clips on Boogeymen: The Killer Compilation, Phantasm is possibly in my top 20 all time favorite horror movies I’ve seen. And if you are a part of Shudder, I believe all sequels are available. Phantasm stars Michael Baldwin, Reggie Bannister, Bill Thornbury and the late Angus Scrimm.

4. Tales from the Hood, dir. Rusty Cundieff, 1995
One of the few horror films that to me, still has relevance in 2019, going into 2020. An anthology film based around the black community on topics of police brutality, racism, abuse, gangs (and gang violence) that still plagues us today. This film is heavily mentioned in Horror Noire, Shudder’s documentary about black horror.

5. Wes Craven’s New Nightmare, dir. Wes Craven, 1994
Released on my birthday (October 14), I consider New Nightmare the blueprint for what was to become Scream. A meta film based around the cast and crew of 1984’s A Nightmare on Elm Street, New Nightmare new spin is that after years of playing Freddy Kreuger, a “demon” is trying to go from the screen and into our “real world”. It stars Heather Langenkamp, Robert Englund, Miko Hughes, John Saxon and Freddy Krueger as “himself”.

6. Night of the Demons, dir. Kevin S. Tenney, 1988
It takes place during Halloween and there’s a party Angela’s throwing. The cover is iconic. The opening credits are fun. The entire movie is just entertaining. I would love to find the other two films but for now, we can enjoy Quigley shoving a lipstick into her nipple. WHAT. Night of the Demons stars Amelia Kinkade, Cathy Podwell, Linnea Quigley and Hal Havins with Alvin Alexis.

7. Creepshow, dir. George A Romero, 1982
Who doesn’t know Creepshow? Another anthology film based around early horror comics with 6 different tales (I’m including the prologue/epilogue) and all the comic transition frames. Stephen King and Tom Savini also round out some of the talent behind the film. My personal favorite story? Either Father’s Day or They’re Creeping Up On You. I also have Creepshow 2 on VHS as well.

8. Alice, Sweet Alice, dir. Alfred Sole, 1976
First heard of this film through Bravo’s 100 Scariest Movie Moments and was super curious about this film. I have two different vhs covers, one of which advertises Brooke Shields’ first film, this film is something that I don’t think could be remade today. I discussed this film at length in two separate posts (x, x) but I do enjoy having a copy of this film with a more 90s looking cover on the front.

9. The Rocky Horror Picture Show, dir. Jim Sharman, 1975
Why is this one on the list? One, it’s the 15th anniversary cover and the tape itself is black with red outline on it and two, it has a Blockbuster sticker still on it! Can you smell the nostalgia from here?? RHPS is one of my favorite musicals and even though it has more sci-fi and comedy than horror, I have to give it some recognition. If you haven’t seen Rocky Horror, what are you doing with your life??

10. Vamp, dir. Richard Went, 1986
An underrated and possibly not well known vampire film that stars Grace Jones. I like Grace Jones. I like that she plays a vampire and her aesthetic in the film is so cool (thanks to artist Keith Haring). Jones is why this movie is fun. And the colors used in this film is fun.

If you have seen any of these films, what do you think of them? Do you collect horror films on vhs? What was your last horror media (dvd, blu, vhs) find or purchase? Let me know!