In the previous post, which I spoke about The Evil Dead (1981), I did mention that the film itself was definitely more horror and gore than the latter ones. We have now entered the latter of the trilogy. Evil Dead 2 and Army of Darkness is definitely more of a comedy horror which there’s nothing with at all.

I’m only mentioning it in case there are some who are reading this and haven’t seen the films, just be prepared for the shift.

Evil Dead 2: Dead by Dawn or simply Evil Dead 2 is a sequel, however, the opening and first half of the film is a rehash of what happened before. The big difference is that instead of a group of friends at the cabin, it’s now limited to just Ash (Campbell) and his girlfriend Linda (Bixler). I can’t be for certain but there were issues with rights and distribution and that’s the reasoning for the completely different rehashing of what happened in previous film. It does however pick right up from when the first movie ended with Ash being attacked and then momentarily possessed, becoming Deadite Ash. This is when we get to see the Ash Williams we know today. He shows up in this film as the badass. It took a while in The Evil Dead but here he is, losing his mind. And a hand.

The rest of the film is him losing his sanity, encountering new people and allies and trying to survive the night with a new group and new enemies to defeat.

For the cinematography in this movie, there are some really cool shots. Like in the last post, there’s a lot of cool tones used throughout. And again, a lot of it is used on the makeup effects to create the “deadite” look. There are some very interesting environmental shots, angles, a lot of which I give credit to Raimi and Campbell.

There’s this interesting cool tone “filter” or feel throughout the film. It never feels warm. It never feels cozy which makes sense. Even the blood effects look cooler. More blueish-purples mixed in reds and of course the lighting impacts that as well. 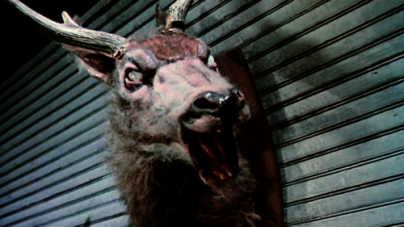 One of my favorite scenes is when Ash is in the cabin and he looks in the mirror and his reflection starts fucking with him. The cabin comes alive and you see glimpses of him going from human Ash to deadite Ash and it’s just climax of chaos and possibly hanging on by a limb, mentally.

It’s a fun movie. It’s a favorite and likeable sequel in my opinion. After this post, I will continue into the Evil Dead trilogy and discuss Army of Darkness which definitely falls into the “camp” horror.

Added another Vincent Price movie onto the “watched” list with The Last Man on Earth (1964). 🧛🏻‍♀️🧟🩸🧪
Tomorrow is officially pumpkin time. And my birthday month 👻🎃
My favorite non final girl is Helen from I Know What You Did Last Summer 👑🪝
Interesting watch, The Bat (1959), as a whodunnit but I quickly figured out who.
Which would you buy for $19.95?
Print and frame this for me, please.