Just school in general and definitely during a pandemic. I don’t know how anyone is surviving in schools during these times, student or teacher or employee. It’s a lot, and it’s going to change those formative years for students as young as they are.

And that got me thinking about horror and school life. School life, whether it’s just attending or you are a part of athletics, band, after school activities, horror tends to really emphasize how school (high school and occasionally college) can make or break your entire life in a new way.

This was also inspired by my aunt who used to be a teacher for community college as well as a friend who works in the school district currently.

Carrie, the 1976 film, directed by Brian de Palma and based off the Stephen King novel (ironically I read that in high school) was my immediate first example. Granted, Carrie has other problems to deal with like her very frantically religious and psychotic mother, but all she ever wanted to do was feel like she belonged. She longed for friends, those interactions that for some seem so easy to get and yet, the moment when she felt that, she was humiliated with a bucket of blood dumped on her. I feel no remorse for the ones who did wrong to her. Sucks that the rest of the school just happened to be there and suffered along.

I also thought of The Faculty which is from 1999, directed by Robert Rodriguez, which fits my 3rd paragraph up there at the top. We all think our teachers at one point were weird or just odd in some way, perhaps even showing some true colors (I could tell so many stories about that) and the entire school itself is corrupted by an outside alien invasion and you can tell it could (and would) spread. We have many different students confronting their peers and teachers, trying to survive. It kind of rivals Disturbing Behavior which again, faculty should be trusted.

Scream (1996), Scream 2 (1997), Prom Night (1980), Urban Legend (1998), A Nightmare on Elm Street (1983) and Halloween H20 (1998) fall into the slasher setting in school. We see these kids going to school, big showdowns take place on a school campus or a climax scene. More so with Scream 2, Prom Night and Halloween H20. I’m just remembering the moment in Halloween where Laurie decides to face Michael, locking herself within the confines of the private school’s property and the theater audience I saw this with screamed and cheered when she screamed out “Michael!” and the theme hit that Dolby sound.

The Craft (1996), Ginger Snaps (2000), Jennifer’s Body (2009) are in a different category: the horror is the student body. One film involves witches, the middle film is about sisters and one becoming a were-creature and the other is where a popular girl becomes a demon who loves to eat. More supernatural

The last set of films I want to mention are outliers. It Follows (2014) is basically a horror sex-ed caution tale, Final Destination (2000) is about cheating death more so than the actual plot of a trip to France, Heathers (1989) is a black comedy/horror about cliques and outsiders, Happy Death Day (2017) is a groundhog’s day gone wrong and Suspiria (1977 or 2018) is just iconic for some really weird, bizarre shit based around a dance academy… whichever version you prefer, you know both are the good kind of weird.

There’s no coincidence that these (as well as others not listed) that young women are at the forefront of this. Women, in general, tend to be the protagonist(s) that we are following in horror, we want to see them overcome and rise above the evil. There is a book about this exact topic called Men, Women and Chainsaws by Carol Clover, which I haven’t read but I’ve heard many things about her and this book. But when it comes to school settings, it’s young women. I wonder why that is. Perhaps it’s the vulnerability, the “we can see ourselves within them” aspect or female characters are just more fun to watch and be invested in but take note of horror and who are your main focus leads.

In what I listed today, Final Destination 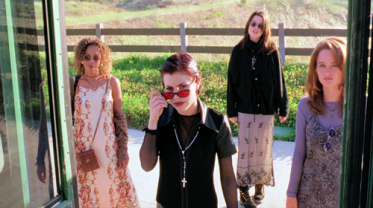 is the only one where the main protagonist is a male character. Everything else is a balanced out ensemble of both or all female characters. I could be wrong but we are really focusing on Devon Sawa’s character first, everyone else second.

Coming of age movies in general I think are great and necessary to see and experience because you can always find a person who you can connect with in some capacity. It’s even more fun when it’s horror thrown in and everything’s just fucked up.

What movie would you add in that I haven’t thought of? Randomly remembered I Know What You Did Last Summer but I think the sequel qualifies a little more… hmm, well there was one right there.