I, by no means, would classify myself as an expert in horror. Yes, I know things about film on a historic level and I watch tons and tons of horror content but in all the years I’ve consumed said content, there are only a handful that really got to me on some level. I’m an expert on knowing if I’m going to like a film or not, or knowing it might be too much for me to handle (especially on first view. I know how I would respond to a movie and as of lately on this journey of watching different kinds of horror content, I…gotta say that there’s some great shit to watch.

You won’t find “staples” like Halloween, ANOES or Friday the 13th on this list. You’ll find cult films, foreign, underrated films that when thinking about them, still creeps me out on some level. Either an audio, guttural reaction or I’m thinking about this film hours & days after seeing it, those are the qualifications. And I had to really sit and think about this list and the films.

10. John Carpenter’s The Thing (1982) – The interrogation scene and everything after. The special effects of Rob Bottin was definitely used to its best. I shudder every time I see the full body horror and it’s the audio mix of screams, the flame thrower trying to work and the noises the “thing” makes. 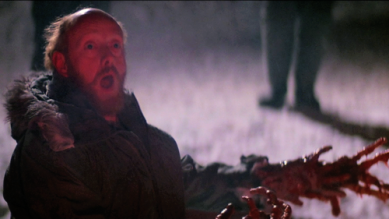 09. From Beyond (1986) – Similar to our number 10 slot, it’s about the graphic nature of the special effects. Now, compared to Re-Animator, this is less black comedy and more sci-fi/campy-esque horror. Everything looks wet and moist and disgusting and bleh. Love this movie though but again, that sfx, it makes the film.

07. Jacob’s Ladder (1990) – It makes me feel a little nauseous when I watch this film. Great film, it’s more psychological thriller horror than straight up horror and it is Jacob’s journey dealing with his psychosis of… are we seeing this for real? Is it in his head? We don’t know but the shaking and fast pace of background figures is really unsettling.

06. Pet Sematary (1989) – This movie is terrifying at its core. The foundation of a family being broken by loss, said loss comes back without a soul, past trauma that arrives in the forms of Zelda and Victor and of course, the slash of the achilles heels by scalpel… it will fuck you up.

05. The Changeling (1980) – I had never seen a film that made me so uncomfortable and invested. Here I was thinking the movie is about our lead protagonist being haunted by his family or the loss of his daughter specifically but NO. It’s the look of the chair. The chair looks not safe. And it’s just there… everywhere.

04. Tetsuo: The Iron Man (1989) – Man and technology, a fetish for technology and metal and it gives me shivers now. I wasn’t prepared at all for what I was getting into. The transformations, it feels and sounds mechanical and painful and it doesn’t hold back. This movie doesn’t hold back at all.

03. City of the Living Dead (1980) – One of my first explorations into giallo and into the filmography of Lucio Fulci, this is the first of his “Gates to Hell” trilogy. This is followed by The Beyond and then The House by the Cemetery. So what makes this different is a priest committing suicide in a graveyard, a body horror scene involving a couple in a car and something else occurs where I gasped and then held my stomach in response. Fulci is good at that.

01. Hereditary (2018) – Dear Ari Aster, I was not prepared at all for what you were going to show on screen. The tension, the gore and graphic nature, the emotional rollercoaster but there is the ONE scene where the unexpected happens and then you show the aftermath a little while later and I screamed. I SCREAMED. It’s the one movie that got the biggest response out of me.

And that’s my list which might be surprising to some, maybe it’ll inspire you to check out some of these films if you haven’t! Of course, I do have a great list of honorable mentions that if I did a top 20 or 30, they’d be in here.

What movie(s) get under your skin and scare you in multiple ways? Maybe you get jump scared, maybe it’s a scream or a cry, you tapped out of watching because it was making you sick. Leave a comment below!

4 thoughts on “10 Horror Films that gives ME the Chills”