Monsters or creatures are a big part of horror. The other day was Alien Day and I do love seeing some xenomorphs on my instagram feed but it got me to think about other horror “monsters” or “creatures” or even beings. So I made a list, then I looked at my list and said hm, maybe instead of 10, I’ll do 10 of maybe some underrated ones or favorites. This isn’t as planned as normally and I did write down the said creatures off the top of my head so if I forget any that you think should belong in the conversation, don’t hesitate to share in a comment!

Monsters and creatures in horror, here we go. 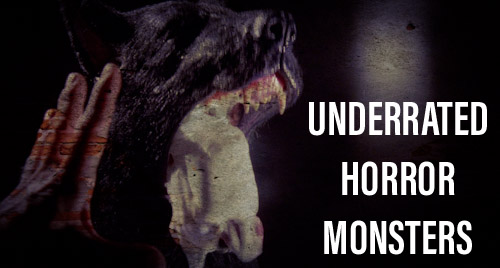 It’s an uneven number but we’re gonna roll with this.

The Stuff is so mysterious. We don’t know really where it came from (besides the ground), why it has addictive qualities and why it looks like the Stay Puft Marshmallow Man exploded. But it’s a monster, the transformations it has on people AND animals alike and it’s monstrous. Oh rest in pieces to Chocolate Chip Charlie and anyone who has a doberman. 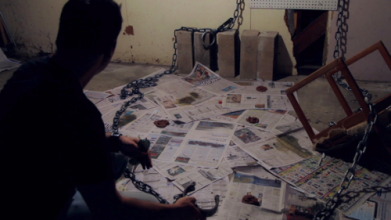 The highlight to Digging Up the Marrow was the very cool looking artwork of the monsters by Alex Pardee. The drawings make the monsters look fantastical and less horror but overall creepy. There are countless drawings online and scattered throughout the film but I wish we saw more and have them be more active. I get similar vibes to like Thirteen Ghosts, where the ghosts themselves are more interesting than the plot or human characters that we’re gonna be around. A big question I had overall with the film is: what was the purpose of Ray Wise’s character mission? Did he want to exploit the monsters? Did he want someone to confirm he wasn’t crazy? It was never explained but if you like a “mockumentary” type of horror film, recognizable faces and fantastical elements, you’d enjoy this.

The Blob and the “big ants” of Them! are in the same category as sci-fi, nuclear, almost b-movie types. The original The Blob (with Steve McQueen) is very much a “it came from outer space” and took over a small town and the same energy is there for Them! Them! I thoroughly enjoyed the build up of where and how and taking down the big monster at the end in California and the government being involved, it was way more than I thought it would be. The remake of The Blob is a different vibe altogether. I will say that there is a more sinister plot than the original, and that’s all I’ll say. 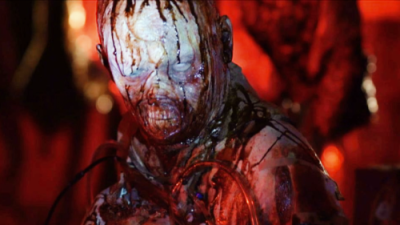 The Void and The Mist I’ll group together for one reason: hidden in plain sight. The Mist is a film that makes me feel a certain type of way and it isn’t because of the creatures that arrive and then disappear with the mist, it’s heavy on the human aspect but gosh the creatures are so underutilized. You get more looks at them online in sketches and concept than in the film, again, stop hiding the creatures! I think the same can be said for The Void. The Void also explores a different world that’s “present” and otherworldly. But these creatures are more crude, experimental, less fantastical and more horror.

And as for Pumpkinhead, which somehow I get that and Rumpelstiltskin mixed in my head. Side note, have you seen Rumpelstiltskin? I never have but I remember the vhs cover for it and he had earrings or piercings? What is that movie? Pumpkinhead’s design (by Stan Winston and his team) is a good representation of ugliness, horror, alien, demonic all rolled up into one that is vengeful, grief stricken demon.

A shoutout goes out to Nightbreed, The Thing, Cloverfield, Basket Case, and A Quiet Place which some are more popular than others but nonetheless, were listed on paper but didn’t make the cut here. I picked these creatures/monsters because I feel like they are underrated or underrepresented when we talk about monsters. We talk about Frankenstein’s Monster and the Universal Horror monsters, Godzilla and other Kaiju, The Meg, The Monster Squad, It, Little Shop of Horrors, Tremors, Gremlins, Critters, and more where the focus is on the alien/supernatural/fantastical creature or being that is clearly not human.

More like when I see the spooky shit every day on a shelf!
Thanks to @shudder for having this available, I had a fun time with this cult film. A bonus review of Basket Case is available to read!
Columbia Pictures presents 13 Ghosts in 1960 and I finally had the time to check out this film... and then review it! Check the link in bio to read! Have you seen this film?
Happy Mother’s Day... 👀
Tomorrow’s post is all about my favorite Slashers ranging from Haunt to The Texas Chainsaw Massacre. What’s your favorite slasher? 🔪
What’s your favorite monster or creature? Link in bio! Here is The Blob (1958) and it’s remake in 1988.