I knew what to expect but I still didn’t know how wild this movie would become. I do want to give a mini shout out to the youtube channel Dead Meat which I believe they discussed on the podcast or… it could have been a kill count but I do remember this film being brought up in some form and even that didn’t prepare me. 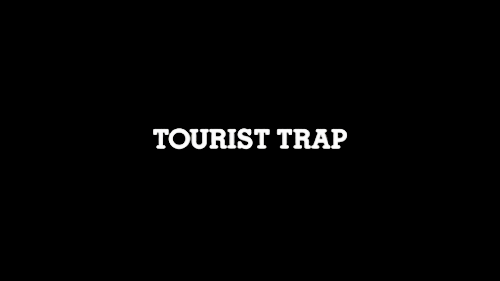 Tourist Trap is rated PG which is surprising but the way its film, I would have guessed at least PG13 cos of the occasional blood but how they finessed that rating is interesting.  (Google/Wiki answered my question how Another thing that I found interesting is for some reason, this movie read like it belonged in 1980 or at least around the Friday the 13th franchise. I don’t know, it’s kind of the reverse of The Shining from 1980, feeling and looking like a 1979 film (filming year). But it could be the wooded environment, young adults (or teens) in danger, lots of running and screaming and a killer.

However, the killer is quite unique and it’s never explained but the killer a) can make mannequins, b) manipulate and control mannequins c) use humans as mannequins and d) he has telekinetic powers.

That’s it, that’s the WHOLE movie, I am not lying. A group of young adults are hunted down by a killer who has telekinetic powers and manipulates mannequins in the “wax museum”.

What I enjoyed were a few things like the environment/setting, characters, special effects and overall creepy factor. The movie stays in one area as in with setting and/or environment and we don’t leave it for the whole movie. The characters are likeable, you do want them to make it out alive, just a case of wrong place wrong time kind of vibe. The special effects goes into the creepy factor of being unsettled. The way the mannequins are used, mouths dropping open and they scream. Visually it’s very creepy and how they are killed is a bit repetitive but also, there is one specific kill that… very uncomfortable.

The character of Mr. Slausen is quite creepy on his own accord too. Think of Mrs. Vorhees on screen more in Friday the 13th, like mm something’s wrong with this person. Something is a bit off with this person.

The one thing I wasn’t a big fan of was sometimes the scenes went too long or repetitive aka using the same scene or portion over and over.

Tourist Trap is truly a cult film and one of those that if you aren’t deep into horror or even film, you wouldn’t know about this film. It was directed by David Schmoeller and stars Chuck Connors, Jocelyn Jones, Jon Van Ness, Robin Sherwood, Tanya Roberts, Dawn Jeffory and Keith McDermott. I’d give Tourist Trap a 3.5 to a 3.75 out of 5. It’s well worth a watch!