A movie that I have “seen” but have not “seen”. A movie that since it’s release has really garnered a lot of critical and audience praise for being campy, fun and unique. We’re talking about the 2010 but 2011 released film The Cabin in the Woods and this is my official first time watching the film in its entirety from the beginning to that crazy ass ending.

Let’s talk about it!

First off, the narrative or plot is kind of genius. We have these films that fit a “formula” which was started in the late 70s if I had to guess but really became more of a “theme” throughout the 80s and then the great film Scream came out and basically laid everything out. Randy Meeks had the rules: you cannot have sex, do drugs or drink, you cannot say “I’ll be right back”, sequels are a bigger body count however this has no sequel but the body count is very big. These rules, this formula of a virgin will last til the end of the film, her friends will die, it’s most likely a lady will be the “final girl”, faced with a big decision of facing the big baddie on her own.

The Cabin in the Woods takes these rules, this formula, and the many, many, many references and influences of horror and wraps it up in a cool bow and it’s a very unexpected film. If you have not seen the film, the title gives away the story. A group of young adults are traveling to a cabin, however, they are closely monitored by an outside source, watching them, leading them to make some decisions. The overall story is that all the monsters, the creatures, the killers, all things we recognize are a part of a bigger plan, a plan to save the world or doom it.

The characters are likeable, even the so-called “bad guys” are jerks but when they’re on screen, we don’t hate them! 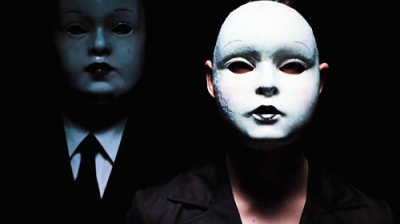 I have to mention the special effects were great, as in the kills and the monsters/creatures/killers. We had everything from a merman to a killer unicorn to a wannabe Pinhead/Cenobite to a set of killers looking like they came from The Strangers. Anything seen in a horror movie is either mentioned, written, or shown. If you like zombies, they are there. If you like mythical creatures? The movie has you. And the idea to have any of these be what takes you out is kind of cool.

The only downside I had about this film is that it’s been heavily shared and shown, plus I had done the screen caps before i saw the film so I was exposed to what it looked like but not knowing how certain characters got to a certain point or what was really going on. I think also seeing the kill count from Dead Meat spoiled it for me BUT that’s on me. I knew I was going to watch this film eventually so it all seemed familiar.

It’s well worth the watch and it’s more campy and less gory kind of horror. The Cabin in the Woods is directed by Drew Goddard and stars Kristen Connolly, Chris Hemsworth, Anna Hutchison, Fran Kranz, Jesse Williams, Richard Jenkins and Bradley Whitford. It gets 4 out of 5 stars from me.

Reviewed a random episode from Tales from the Darkside as this week’s new post. What’s a favorite (or many) episodes of yours from the franchise? 📺📼🔮
I watched, reviewed and had fun with 1978’s Piranha. Link in bio! Have you seen this movie? What did you think?
I did a list of movies that has scared me in many ways. The top 10 includes Hereditary, The Exorcist and Tetsuo the Iron Man. 🔗 in bio!
Happy Father’s Day ❤️🔪
I was in a re-organizing mood today.
Night (or Curse) of the Demon is the second Jacques Tourneur film seen this year (after Cat People). I reviewed it, on the blog, link in bio. Have you seen this black and white classic?