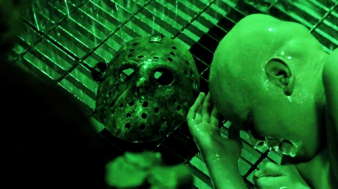 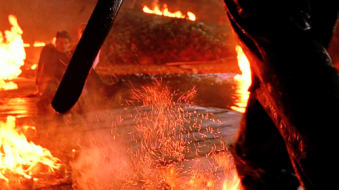 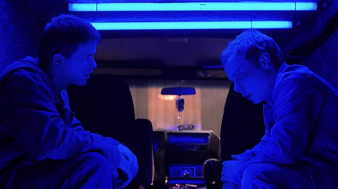 I love you and I dislike you at the same time. I’m trying to remember whether or not I saw this in theaters. A part of me feels like I have considering I saw a lot of horror in the late 90s/early 2000s in them. I know everyone was ecstatic to see these two in the same film, on screen, in development hell for about 10 years.

But this isn’t about my true opinion of this film but the use of color.

A Nightmare on Elm Street films have always had a great use of color schemes, more than the Friday the 13th franchise but these deep colors are a great representation of how creative and even colorful ANOES can be. Of course most of these are taking place during dreams, which says a whole lot.

Lots of reds and greens, those complimentary colors that also represents Freddy and his sweater but then on the flipside, a lot of blue and orange/yellow-ish lighting and tones. It feels like the movie is a throwback or a nod to all those 80s horror films that used those neon colors to create the atmosphere, quite successful at it, too.

Freddy, he gets the red (anger, violence, danger, primal) tones, I noticed. He’s angry, angry that he was being forgotten and ignored and then having his kills taken from him. But then we have Jason who is basically like painted as the “innocent” in this film, and he’s got the color blue (wet, color, representing water, loyalty) and even green (ambitious, greed, environment) and hm, maybe it isn’t all an accident or coincidence. Maybe Yu actually put some thought into this film.

Or maybe put that credit to the cinematographer and whoever else on the creative aspect.

The movie is enjoyable for action, even the cool cinematography. Story wise, it isn’t the best but I guess when a film or idea has been in development hell for 10 years, this is probably the best or simplest avenue to head into.

But check out Freddy vs. Jason, I’d give it the big OK.