When you think of television horror, many popular content comes to mind: The Twilight Zone, Tales from the Crypt, Tales from the Darkside, Goosebumps, American Horror Story, maybe episodes from The X-Files and Are You Afraid of the Dark?. But in the midst of those great shows and others that weren’t mentioned here but you were thinking of them, there’s a hidden gem that debuted in the late 80s and lasted only 3 seasons.

Not to be confused with Nickelodeon’s Ahhh! Real Monsters (left) or the alternate series The Munsters (bottom right), Monsters was developed in 1988 with the help of producer Richard P. Rubenstein. If that name sounds or looks familiar, he was a constant producer with the late George A. Romero. Together they had worked on Creepshow, Dawn of the Dead, Day of the Dead, Tales from the Darkside series and co-founded Laurel Entertainment together. On a random note, he also produced the 2000 miniseries Dune for Sci-Fi as well as the sequel, Frank Herbert’s Children of Dune. 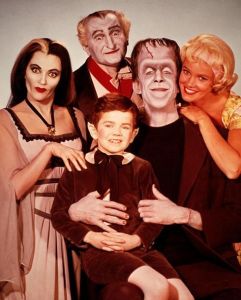 As Tales was more of a mixture of horror, sci-fi and fantasy, Monsters is strictly horror. You can consider it an anthology.

I rewatched a few episodes to get acquainted again with the show and there are moments of pure creepiness and special effects makeup looking very… effective. For example, one of my favorite episodes from season 1, episode 18, “The Match Game” checks off all the boxes. It premiered in April 15, 1989 and stars Byron Thames, Sasha Jenson, Tori Spelling in one of her first acting roles and a familiar face in Hellraiser’s Ashley Laurence. The story is quite simple, our four characters are telling a story a la ‘The Match Game’, where you use a match to tell a bit of the tale as the match runs out. This particular episode screams horror. The creepy haunted house, a ghost story, young adults in danger and of course, our menacing ghost who is more like a zombie type and reminds me a bit of the ghost from Are You Afraid of the Dark’s episode, The Tale of Dead Man’s Float.

Nonetheless, the episode is filled with growing tension every time the story is told, intercuts of a “figure” emerging out from the darkness, coming closer and closer until the climax hits and basically, all hell breaks loose. You don’t see the monster entirely, it’s hidden in the darkness with random flashes of lightning to showcase how decomposed and wet he is. You don’t need to show the monster in its entirety and Monsters was good at showcasing that. One of the bigger strengths Monsters showcased was their special effects.

Monsters, despite having some great episodes such as Holly’s House, The Match Game, Pool Shark, Habitat, Jar, and The Moving Finger, was lost in the shuffle of what is deemed as memorable or classic in television horror. I can count on my fingers of how many people could bring up Monsters and it’ll be on one hand. And that’s pretty sad to think about. A show that has a visual connection of Tales from the Darkside but darker isn’t a lot to keep the show in the forefront of horror culture. Sure, there are those like you and me who remember this show in some capacity whether we were around when the show premiered or the frequent reruns on Chiller TV many, many years ago and they did have some strong episodes. Some do leave an imprint. Others are easily forgotten. Not to say Monsters is forgotten but with the constant change of horror tastes, it has into the background and has stayed there for a long time. Maybe one day Monsters will get some kind of credit it deserves and it is a show that could stand a “reboot” of sorts.

What were some of your favorite episodes of Monsters? Let me know in the comments below! Monsters, the first season is available through Amazon Prime.

I have too many but there’s no such thing as too much! 📼🔮🔪🧟‍♂️📺
Today’s feature film was 1942’s Cat People which is available on @shudder 🐈‍⬛ Have you seen this #rko feature film? What did you think of it?
A fun dive into Hey Arnold having some hidden gems of kids horror on the blog! Link in bio!
Jennifer Check lands in my top 50... link in bio to see exactly where! 👅🔥
Just one film appearance and yet she’s iconic... mother of all vampires, Akasha, makes my top 50 female characters in horror. Link in bio. 🩸👸🏽 🎻
Kirsty makes my list of top 50 female characters in horror! Link in bio to catch up with 3/4 parts up!