underestimate the extent, value, or importance of (someone or something).
“a very underrated film”
—

Vampires have been a part of our pop culture and horror genre since Bram Stoker’s Dracula novel was released in 1897. Since then, we’ve gotten many interpretations of what a vampire is in different forms of media. I remember the video game for Bram Stoker’s Dracula on Sega Genesis, Anne Rice’s gothic novels based in New Orleans for The Vampire Chronicles and throughout the ups and downs of the vampire lore, there’s only so many films that people can name off the top of their head; Interview with the Vampire, Dracula (both versions), Twilight (though I’m not a fan), Nosferatu, but what about… Vamp?

Vamp is a 1986 horror film that has comedic moments but very cool vampiric lore. Also, the legendary Grace Jones is in it and is great in it. So why don’t many know about this film?

The 1980s were the huge surge of horror films since the 1920s and 1930s. The 80s brought us Freddy and Jason, Charles Lee Ray would forever be trapped in the body of a child’s toy and the decade had a slew of original ideas and content. Evil Dead, Re-Animator, Sleepaway Camp, Night of the Creeps, Poltergeist, An American Werewolf in London and The Lost Boys, a vampire film. Vampires were a constant driving force with The Lost Boys and Fright Night and at the other end of the spectrum was Once Bitten and The Hunger. But Vamp would fit in the middle… either you would know about this film as a horror fan or film fanatic or you’d know nothing about this movie and that’s quite sad. 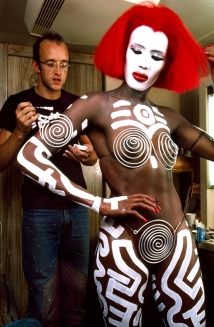 Is it a great vampire film? As in classic, memorable? No. Is it fun? Yes. It’s awesome though you do get a bit antsy when you don’t see Jones after encountering her. The plot of Vamp is quite simple. You have two pledges who are ordered to get a stripper or find a stripper and bring her back and they find a little strip club where they encounter Grace Jones (Katerina) who again is commanding on screen, stands out, her body makeup is done by the late but great and influential artist Keith Haring but the club is ran by vampires. This movie is basically the blueprint of what came in the 90s, From Dusk til Dawn.

The special effects, makeup and vampire design is how I’ve always seen vampires in general. Grotesque, their features are exaggerated but there’s a hidden beauty underneath. The teeth are sharp and vicious and I’ve always liked my vampires to look the part. They are creatures, they are monsters, they are not meant to be beautiful or “normal” looking i.e. Twilight or Interview with the Vampire (which I do love for whole other reasons). These vampires are up there with Nosferatu, 28 Days of Night, Fright Night, Salem’s Lot, From Dusk til Dawn and many others.

Why do I think Vamp is underrated? It got lost in the shuffle of 80s horror and vampire horror. It got some mixed reviews when it was released and yet I don’t think it has reached cult level. It’s been overshadowed and since it’s released, I don’t see many talk about the film unless it is among the horror community. It has the quintessential 80s vibe with the neon lighting and colors, cheesy moments, nudity, creature violence and an all around niche into some vampire lore.

Check out Vamp wherever possible. Luckily, I have my copy on vhs (countless thrifting trips) but the watch is great fun.

One thought on “Underrated: Vamp”

Tonight’s post is all visual and my praise (& critique) of movie posters! What movies do you think have great or not so great advertising? 🍿🎬🎨
The smallest horror pin collection.
I’m back with go to horror favorites to get comfy and cozy with! Link in bio!
Favorite found footage or adjacent horror is the topic this week. Which is your favorite?
Deep dives and underrated horror talked about today. What would you consider to be under the radar horror aka anything not top tier/general public had 0 clue?
Happy International Women’s Day… horror edition.