I did a previous post about my favorite VHS finds which I will link so please check that one out. This time, we’re going to do covers. Out of maybe 100-110 vhs tapes that are in my horror collection, some of the covers do stand out. And if you think about it, remember what it was like going to a video store of ANY sort and the covers either drew you in or repelled you. I distinctly remember seeing the cover for Friday the 13th Part VIII: Jason Takes Manhattan and the looming mask of Jason over Manhattan and that’s what drew me in. Sadly the movie was a LIE because Jason didn’t take Manhattan, he just took a cruise. 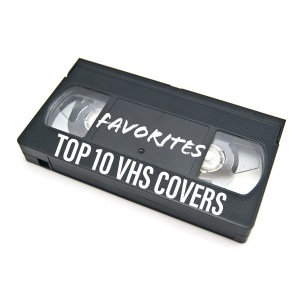 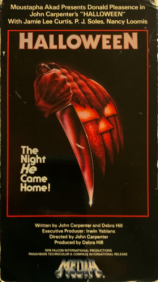 An occurring theme right off the bat for me will be simplicity vs detail. And up first is 1978’s Halloween. This film, I’ve seen many vhs covers for this film but the one thing that stays the same is using the pumpkin face with a knife. The background can change all it wants but since the original aligns itself with this image, it’s necessary. The pumpkin design itself is cool but we know there’s no actual pumpkin mask.  This is what I’m taking about: simple. It’s a simple design of the pumpkin mask, looking menacing and a butcher knife, a hand but no full body, ridges on the hand and on top of the head but what I really like is the sort of reflection in the knife. It’s just barely showing some kind of figure.

Now this is one I definitely remember seeing in Blockbuster and got a little freaked out by it. I think it had the other sequels next to it and it’s been burned in my brain since I was a kid. I don’t think I ever picked it up and rented it but now seen the film at least 5-6x, I dig the movie a lot. This is not a review of Night of the Demons but you besides the point, this cover boils down to two things: the visual makeup/spx of Angela and the title design. Angela looks creepy, demonic, she’s down for a good time but it’s the combination of how she looks and she’s brightly lit (not in the shadows because she’s a demon) and it’s BOOM IN YOUR FACE. I studied typography and there’s something about “demons” written that font is quite… eerie. 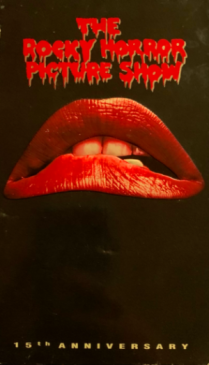 The Rocky Horror Picture Show, another example of what I love: simplicity. Black background, plain. Just the red lips in the center but it’s not in the “middle” of the cover’s layout. I like there’s an empty space there and it’s asymmetrical. I will also say that the version I own, the tape is also a red color. I have RHPS on dvd as well and looking at the cover and I prefer the vhs one. They do share two things in common, the same font use and the red lips. However, the dvd is on a grey background, Dr. Frank-n-Furter (Tim Curry) in lingerie and heels, using the lips as a couch and at the bottom is an image of Rocky, Magenta, Frank, Janet and Brad performing, matching the same grey background. Just get rid of that bottom image, go for black again and keep it simple.
The lips and Frank literally can carry visually alone. 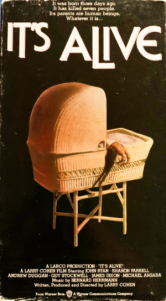 It’s Alive was one of the cooler finds of last year. This film was featured on the 100 Scariest Movie Moments countdown on Bravo and since then, it was a must see film. Now owning it on vhs, again, the cover is very simple and effective to what the full of that movie is.

Black background, a baby crib in the middle and we see just the arm of the baby and that isn’t normal. It’s Alive challenges what we consider normal when it comes to motherhood. Not to the scale of Rosemary’s Baby but more on the opposite end of the spectrum. There’s an eeriness, a curiosity that the visual presents and again, very simple. 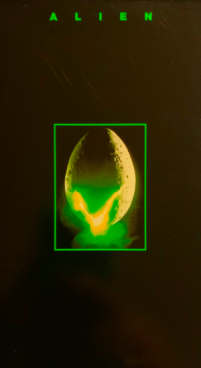 Alien. This is a recurring theme. Simple background, it’s black, we’re using a bright color for text and just a cracked egg in the middle. The movie backs up what the cover hints at. And I recently saw a fanmade poster, or it could be real, not sure, of Alien on tumblr. If I can find the post, I’ll link that in here as well but it’s a white background, text says “In space, no one can hear you scream” but the visual looks like a water or oil effect, abstract but look at it long enough to see the outline of the alien.

But what really drew me to it was the title of the film at the bottom and it’s just lines. Lines of the letters a, l, i, e, and n but missing the rest of the structure of the letters. It’s effective. It’s brilliant. Update, it is a fanmade and it will be linked below. 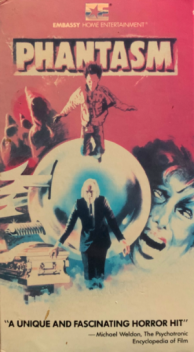 Phantasm is one of the few on this list that is more than just a plain, simple background. I really like the art of this cover versus the other vhs of Phantasm I have. The other is… a storm like background with the Tall Man framing the cover, holding a chrome sphere. Granted that cover was produced by MGM and this one is Embassy Entertainment. I mean, looking at this one, it’s more stimulating than the other one (one day I’ll share that cover).

The color choices, the sphere is front and center but not taking away from who the main villain is. What I also like is the empty spaces. It doesn’t clog up the entire cover, there’s moments to let the images breathe. 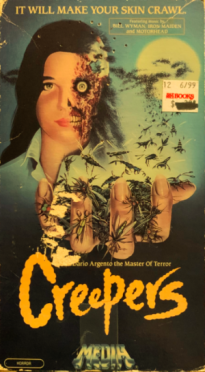 Creepers aka Phenomena is pretty. It’s such a cool looking cover. The illustration itself is nicely well drawn, I love the transformation of our lead character played by Jennifer Connelly. A split of a human, beautiful young girl, her face is falling apart and stripped of its beauty to then transform into insects.

The artwork is really cool, that’s why I like this one. The colors are more cool which is a lovely change of pace after what I’ve been showcasing so far. And apparently someone bought this in 1999 from Half Price Books. 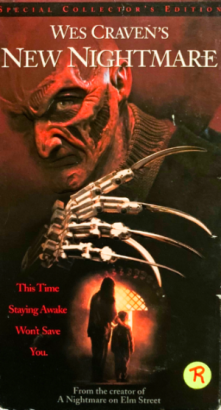 Wes Craven’s New Nightmare has this texture on Freddy that makes the cover unique. Interactive with touch. Once again, red and black colors but the red is a more maroon, perhaps brick. I will say there is one thing I don’t like about the cover and that’s the inclusion of Heather Langenkamp and Miko Hughes there. They do not need to be there. It looks like a last minute addition in my opinion.

Freddy himself is an imposing entity, especially in this film. You don’t need anything or anyone to sell the movie but him and when it’s realized that it isn’t the Freddy we recognize from the previous films, it’s even more frightening. Something has taken Freddy’s face… I’ve been talking about Freddy (and ANOES) a lot lately. 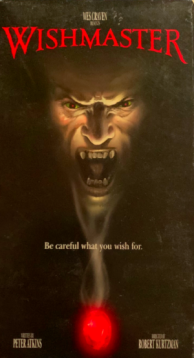 Wishmaster has once again a black background, our main focus of the film and red text. It’s quite linear as well. The title, the Djinn himself and the gem stone. Even the tag line is in the middle. What is it about black and red in horror? Black and yellow is more of a color combo for caution (i.e., signs, caution tape, bees) but black and red? Is it red for blood? Red is a color that is associated with anger and black is darkness and if you combine the both, it does create an ominous, perhaps sinister combination.

That also explains half of my collection is black vhs with red font… a revelation has been made. Perhaps this is why most if not all VHS tapes of horror share the same color scheme. It’s emotional based and visually effective. Hmm. 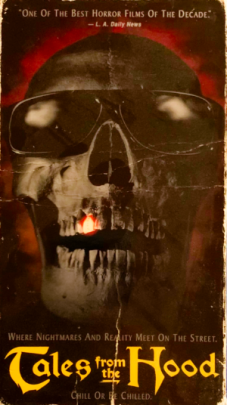 Tales from the Hood…. how else can you showcase that this film is directed by a black man, based around black culture and black issues by putting a skull on the front with a gold tooth and and sunglasses. It just dawned on me that the image takes up the entire box cover, forcing you to look at it, study it. Just like the topics taking place in the film (gang violence, domestic and child abuse, racism, police brutality, the movie is making you take a look at what goes on in the black community and the cover is a great reflection of that. Planned or not, maybe that’s how I interpreted the cover, but in my mind, it makes sense. It’s still a film that is relevant today.

Do you own any of these films in your collection? What are your favorites covers for vhs? What are some you dislike? Does vhs bring about a dose of nostalgia that the latest generation

*worth noting: I love when covers have original price stickers on them
*previous VHS post here
*ALIEN poster fanmade here