underestimate the extent, value, or importance of (someone or something).
“a very underrated film”

What qualifies as an underrated film?
a) It the lack of knowledge the general public knows?
b) Is it genre based?
c) Was a financial failure or success?

Why do some feels break through the mold and some don’t?

I’ve had this idea of doing a new blog series within Shots of Horror where I discuss or bring to your attention horror films that are not talked about, referenced, known or even just out there on the market to digest.

I’m a huge fan of horror, been one since I was a kid and I remember seeing countless horror films on HBO or Cinemax or in theaters way back in the early 2000s. I was “mature” enough to handle them which is probably why nothing really shocks me much now as an adult. But also, I’m a collector of horror films on vhs, I have a very lengthy collection (as well as horror collectibles) and on my shelves are quite a few films that I’ve discovered on a whim and not know about their presence.

We know the big greats like Halloween, A Nightmare on Elm Street, Friday the 13th, Child’s Play, Scream, these films that have had a huge cultural impact as well as pop culture. I have the coolest job of currently dressing up for Halloween on weekends and it was interesting to see these films mentioned as a huge portion of Halloween costumes and masks. And I wondered why did these become a big hit (in all aspects) but I’ll be surprised if someone cosplayed or dressed up as The Tall Man or Sam from Trick r Treat. The content is out there but not many are consuming it because maybe they don’t know about Trick r Treat or Phantasm or Hellraiser.

I’ve always thought that unless you are a film fan or a horror fan, you’d know way more about film and the genre versus the general public. So, in the very first post of Underrated, I thought of a movie that I have countless times, discovered it during the 100 Scariest Movie Moments on Bravo (it is also on youtube), and the film is Alice, Sweet Alice.

Alice, Sweet Alice (also titled as Holy Terror or Communion) is directed by Alfred Sole and released in 1976. It stars Linda Miller, Paula Sheppard and Brooke Shields (in her first role). And if I had to give the cliff note version of the plot, it’s this: murders are happening around the central plot of a young girl being the main suspect of those deaths as well as her younger sister’s. 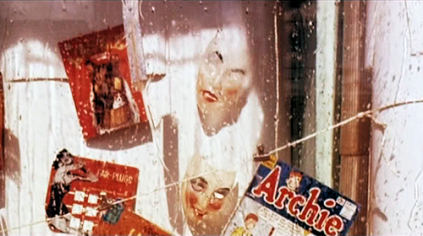 Films that are showcasing the innocence and naivety of children yet it’s corrupted by darkness or trauma.

Now out of the group of films I’ve mentioned, I can guess and say four or five are probably discussed while three are very popular among the general public: Rosemary’s Baby, The Omen and The Exorcist.

Alice, Sweet Alice is the oddball out of that selection in that it deals with family dynamic of the sisters, the mother at how she treats her daughters drastically different, religious content or “icons” (the constant repetitive imagery throughout religion, especially European/western interpretation such as Mary, Jesus, certain angels), manipulation of a child possibly influencing adults and the biggest departure of them all is children hunted as prey and then killed. A film that can rival that kind of energy throughout the film would be Children of the Corn (1984).

The entire film is more or less of a whodunit disguised as a slasher. It gives a nod to Don’t Look Now with the raincoat imagery throughout but I can also see a nod to the film Blood and Black Lace (1964, dir. Mario Bava) with a similar vibe as well. 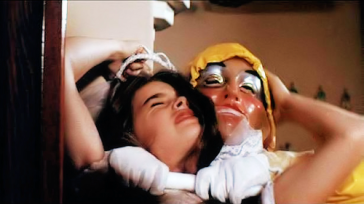 What makes it underrated? It’s not an honorable mention or a film that deserves some kind of credit. Some of the vhs tapes of the film that I’ve collected mention that it is Brooke Shields’ first film but even with that, this isn’t an immediate Brooke Shields film. I can guess that if you ask people to think of Brooke Shields, two things come to mind: Calvin Klein ads and The Blue Lagoon.

Granted we also live in a day and time where our reality is children being the victim more and more frequently due to violence which I can also say, we have the right to be sensitive.